A price index is calculated relative to a base year. Indices are typically normalized at 100 in the base year. Starting from a base (or reference) year, a price index Pt represents the price of the commodity bundle over time t. In base year zero, P0 is set to 100. If for example the base year is 1992, real values are expressed in constant 1992 dollars, with the price level defined as 100 for 1992. If, for example, the price of the commodity bundle has increased in the first year by 1%, then Pt rises from P0 = 100 to P1 = 101. 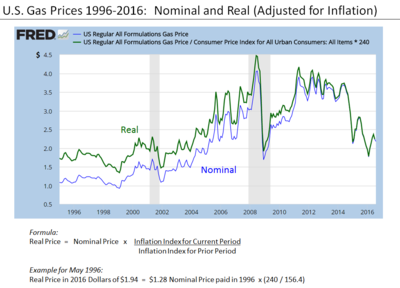 Comparison of real and nominal gas prices 1996 to 2016, illustrating the formula for conversion. Here the base year is 2016.

The price index is applied to adjust the nominal value Q of a quantity, such as wages or total production, to obtain its real value. The real value is the value expressed in terms of purchasing power in the base year.

The index price divided by its base-year value,

gives the growth factor of the price index.

in real terms. It measures by how much the buying power of the quantity has changed.

is the nominal growth rate of

is the inflation rate.

between −1 and 1, we have the Taylor series

The bundle of goods used to measure the Consumer Price Index (CPI) is applicable to consumers. So for wage earners as consumers, an appropriate way to measure real wages (the buying power of wages) is to divide the nominal wage (after-tax) by the growth factor in the CPI.

Gross domestic product (GDP) is a measure of aggregate output. Nominal GDP in a particular period reflects prices which were current at the time, whereas real GDP compensates for inflation. Price indices and the U.S. National Income and Product Accounts are constructed from bundles of commodities and their respective prices. In the case of GDP, a suitable price index is the GDP price index. In the U.S. National Income and Product Accounts, nominal GDP is called GDP in current dollars (that is, in prices current for each designated year), and real GDP is called GDP in [base-year] dollars (that is, in dollars that can purchase the same quantity of commodities as in the base year).

As was shown in the section above on the real growth rate,

is the rate of increase of a quantity in real terms,

is the rate of increase of the same quantity in nominal terms, and

is the rate of inflation,

and as a first-order approximation,

In the case where the growing quantity is a financial asset,

is a nominal interest rate and

is the corresponding real interest rate; the first-order approximation

is known as the Fisher equation.[1]

Not only time-series data, as above, but also cross-section data which depends on prices which may vary geographically for example, can be adjusted in a similar way. For example, the total value of a good produced in a region of a country depends on both the amount and the price. To compare the output of different regions, the nominal output in a region can be adjusted by repricing the goods at common or average prices.