Rauma (Finnish pronunciation: [ˈrɑumɑ]; Swedish: Raumo) is a town and municipality of ca. 39,000 (31 July 2020 )[2] inhabitants on the west coast of Finland, 92 kilometres (57 mi) north of Turku, and 50 kilometres (31 mi) south of Pori. Granted town privileges on 17 April 1442 (then under the rule of Sweden), Rauma is known for its paper and maritime industry, high quality lace (since the 18th century) and the old wooden architecture of its centre (Old Rauma, Vanha Rauma), which is a UNESCO world heritage site.

In the 14th century, before being declared as a town, Rauma had a Franciscan monastery and a Catholic church. In 1550, the townsmen of Rauma were ordered to relocate to Helsinki, but this was unsuccessful and Rauma continued to grow.

Practically the whole wooden part of the town of Rauma was devastated in the fires of 1640 and 1682. The city centre, which was as large as the town was until 1809, has approximately 600 wooden buildings. The neo-renaissance style of many of the houses is a result of prosperity brought on by seafaring. In 1897 Rauma had the largest fleet of sailing boats in Finland, totaling 57 vessels. Goods were mainly exported to Germany, Stockholm and the Baltic states. In the 1890s, Rauma got a teacher's college (a 'seminar'), which was later annexed to the University of Turku. A part of the department of education still exists in Rauma.

After World War II, Rauma developed into an industrial city, the main industries being shipbuilding, paper and pulp mills, and metal industry. Rauma is also the fifth largest port in Finland with almost six million tonnes of shipping per year. Olkiluoto Nuclear Power Plant is located next to Rauma, in Eurajoki. Near Rauma, there is the static-inverter plant of Fenno-Skan.

Sunset at the port of Rauma

Rauma is located between Turku and Pori by the national road 8 (E8). Finnish national road 12 starts from Rauma and it was extended to the port of Rauma in 2008.

A railway connection from Kokemäki is in active freight use, as there is a straight connection to the heavy industry areas and to the port of Rauma. The rail passenger traffic ended in 1988.

Satakunnan Liikenne Oy runs the local bus traffic and it has 3 lines in Rauma.[8] The hub for the local buses is located in Savila while the Long distance buses operate from Rauma bus station. The long distance buses take passengers directly to Pori and Turku and to Tampere and Helsinki with one transfer at Huittinen.[9]

The nearest airport is located in Pori. The port of Rauma serves only freight ships on frequent basis.

Rauma has its own dialect of Finnish, "Rauman giäl". The dialect inherits words from languages such as Swedish, English and German due to the seafaring past. The dialect has been diluted into mainstream Finnish in day-to-day use, but it is fairly well studied (mainly by Hj. Nortamo) and practiced as a hobby.

Rauma Maritime Museum in the Rauma Nautical School building was founded in 1999.[10]

Annual Lace Week has been arranged in Rauma since year 1971. During the Lace week local craftspeople arrange small exhibitions in the Old Rauma area. The Lace week culminates to the Black Lace Night, when the small boutiques are open late night, various shows and concerts are held and people dress in black lace. 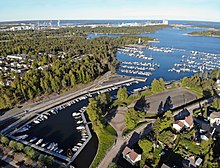 One popular saying goes that every family in Rauma owns a boat – this is not true, though the city has room for ca. 2,800[11] boats at its docks. People can use their own boats or water buses to get to the Kylmäpihlaja lighthouse that doubles as a hotel and recreation site. Water buses take people to Reksaari island and former garrison island of Kuuskajaskari. Both islands are in recreational use.

Rauma is twinned with the following cities and towns:[12]