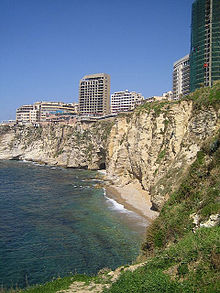 Beirut as seen from the pigeon rock

Raouché (Arabic: الروشة‎, romanized: ar-Rawše) is a residential and commercial neighborhood in Beirut, Lebanon. It is known for its upscale apartment buildings, numerous restaurants, and cliff-side cafés that line Avenue de Paris, which forms part of the Corniche Beirut. The corniche or the wide, seaside sidewalk of Avenue de Paris is popular on weekends and evenings where strollers and joggers crowd the pavements.

Off the coast of Raouché, there is a natural landmark called the Pigeons' Rock (also known as the Rock of Raouché). Located at Beirut's westernmost tip, the two huge rock formations, which stand like gigantic sentinels, are a popular destination for locals and visitors alike.[1]

Raouché also is claimed to be the remains of a sea monster the Greek hero Perseus killed to save Andromeda. The stone is rock as Perseus used Medusa’s head on the monster to turn it into stone.

Some historians believe that the word "raouché" derives from the Aramaic word rosh or Arabic word ras, both meaning head. Other historians argue that it is a corruption of the French word roche (rocher), meaning rock.

The shores near Raouché have yielded the area's oldest evidence of human existence, flints and basic stone tools, which are displayed in the AUB Archaeological Museum.

The area adjacent to Raouché, called 'Dalieh', is presently in the process of being sold to real-estate developers.[2] A campaign was started early 2014 against the privatization of Raouché and the adjacent area-called al-Dalieh-which was initially titled "The last that remains".