Ranelagh (/ˈrænələ/ RAN-ə-lə, locally pronounced /ˈrɛnələ/; Irish: Raghnallach) is a residential area and urban village on the south side of Dublin, Ireland in the postal district of Dublin 6. 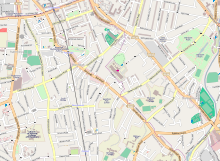 The district was originally a village known as Cullenswood [1] just outside Dublin, surrounded by landed estates.

On Easter Monday in 1207, a celebrating group of English inhabitants of Dublin were attacked here by Irish raiders from county Wicklow. Three hundred people were said to have been killed.[2]

In the early years of the Irish Confederate Wars (1641–1649) the area was the scene of skirmishes culminating in the Battle of Rathmines in August 1649. After the Irish united with the Royalists against the Parliamentarians, an attempt was made to take Dublin. Their army under Ormonde was defeated, many of them killed, and the place where they fell (mainly between Rathmines and Ranelagh) was known for a long time as the Bloody Fields.[3]

The area was incorporated into the expanding city in the 19th century, after which massive development took place.[4] The locality became known as Ranelagh when a popular entertainment venue (now a public park) was established about 1770 and named Ranelagh Gardens after a similar venture of the same name in Chelsea, London.[5] (The model and the name were also copied in other cities, including Liverpool, New York and Paris).[6] The original Ranelagh Gardens in Chelsea was built on the site of Ranelagh House, the London home of the Jones family, who took their title (Earls of Ranelagh) from lands in County Wicklow that had belonged to Fiach McHugh O'Byrne[7] sometimes described as Lord Ranelagh, because he was head of the Gabhal Ragnaill branch of the O'Byrne clan.[8]

In 1785, only two years after the first manned flight, Richard Crosbie successfully flew in a hot air balloon from Ranelagh Gardens to Clontarf.[9] The 225th anniversary of his flight was commemorated with a balloon flight from the same gardens on 23 January 2010 although due to adverse weather the balloon did not take off.[10] 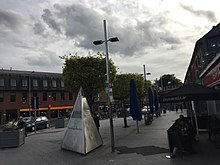 Ranelagh Triangle in September 2017, with a triangular memorial to local environmental activist Deirdre Kelly in the foreground

The name Ranelagh applies to many geographical features. The stretch of road joining Sandford Road (which begins at the corner of Anna Villa) to Ranelagh Road (which begins at the railway bridge) is known as Ranelagh or Ranelagh Village. The whole surrounding area is also popularly known as Ranelagh, stretching from Charlemont Bridge on the Grand Canal at the northern end of Ranelagh Road down to the junction with Milltown Road at the southern end of Sandford Road, and from Leeson Street to the East towards Rathmines to the West. At the centre of Ranelagh is "Ranelagh Triangle", semi-officially "the Angle", which is the junction of Ranelagh Village and Charleston Road at Field's Terrace. Nearby restaurant "Tribeca" references these geographical features (i.e., Tri-angle Be-low Ca-nal). To the North of the Triangle is the "Hill Area" of Ranelagh, which was the scene of Lee Dunne's novel, "Goodbye to the Hill". Ranelagh contains many fine Victorian streets such as those surrounding Mount Pleasant Square.

The townlands of Ranelagh North and Ranelagh South are in the civil parish of St. Peter's and in the barony of Uppercross. They are bounded on the north by Harcourt Road and Adelaide Road, on the east by Sussex Road and an old irregular boundary from there to Chelmsford Road, on the south by Chelmsford Road, Ranelagh Village, Charleston Road, Oakley Road and Dunville Avenue, and on the west by Beechwood Park, Belgrave Square East, Mountpleasant Avenue Upper, Bessborough Parade, Rathmines Road Lower and Richmond Street South. The area, popularly known today as Ranelagh, also includes parts of the adjoining townlands of Cullenswood, Sallymount and Milltown. [1]

Ranelagh is in the Local Electoral Area of Rathgar-Rathmines with effect from May 2014, formerly Pembroke/Rathmines. It is located in the Dáil Constituency of Dublin Bay South with effect from the 2016 General Election, formerly Dublin South-East.

There are several primary and secondary schools in the area.

Scoil Bhríde, founded in 1917, was the first gaelscoil (Irish-language school) in Ireland.[11]

Lios na nÓg, another gaelscoil, is located in Cullenswood House on Oakley Road, where St. Enda's School (Scoil Éanna) was set up by Patrick Pearse in 1908. This was the first school in Ireland where pupils were taught in both Irish and English. St. Enda's school then moved to Rathfarnham in 1912 leaving the school building, Cullenswood House, unoccupied. In 1998, Lios na nÓg moved in and the school went under a major refurbishment over the period 2008-'09.

The Ranelagh Multi-Denominational School, is another primary school established in September 1988, which is located on the main Ranelagh road close to the Luas stop. It is on the site of the old St. Columba's national school, which was donated to RMDSA by the Church of Ireland. The school won many awards for the architecture of the building, built in the late 1990s.

Other primary schools in the area include Sandford National, located close to Gonzaga College.

Lee Dunne's novel Goodbye to the Hill is set in Ranelagh.

The cover picture of John McGahern's The Pornographer is of Mount Pleasant Square.

Founded in 2003, Ranelagh Gaels first commenced competitive action in 2004. They recently topped the league in Division 9 and now competed in League 8, and grade C in the Dublin county championship. They play their home games in Bushy Park in Terenure, and train in UCD. They have recently started a ladies team, which competed in the league in 2010. The Ladies won the Dublin Junior E Championship in 2010, the first Championship the club had ever won.[12]

The Luas Green Line has two stops in the Ranelagh area: Ranelagh/Raghnallach (on Ranelagh Road) and Beechwood (on Dunville Avenue), built on the site of the former Ranelagh railway station on the Harcourt Street railway line (the station opened as Ranelagh & Rathmines on 16 July 1896, was renamed Ranelagh in 1921 and finally closed on 1 January 1959).[13]

The Dublin Metro (Metrolink) was expected to upgrade Ranelagh's existing Luas stop to a metro station,[15] but, as a result of the portal of the tunnel being moved south to just north of Beechwood, the Metro will no longer stop at Ranelagh. It will serve Charlemont, immediately north of Ranelagh when Phase 1 of Metrolink opens and Beechwood when Phase 2 opens.[16]

Notable people associated with Ranelagh include the following: