Ralph Edward Goodale, PC (born October 5, 1949) is a Canadian politician. A member of the Liberal Party, he was first elected in 1974 as the Member of Parliament (MP) for Assiniboia. Defeated in 1979, he moved into Saskatchewan provincial politics and was leader of the Saskatchewan Liberal Party from 1981 to 1988. He returned to federal politics in 1993, as the MP for Regina—Wascana (known simply as Wascana from 1997 to 2015), and served a cabinet minister under prime ministers Jean Chrétien, Paul Martin and Justin Trudeau, in several roles including minister of finance and minister of public safety.

Active at politics from a young age, he was first elected to the Parliament of Canada in the 1974 election at the age of 24 from the seat of Assiniboia. He served as a government backbencher until the 1979 election, when he was defeated.[citation needed]

In 1981, Goodale was named leader of the Saskatchewan Liberal Party.

He led that party to a very poor showing in the 1982 provincial election, in which the party received 4.51% of the popular vote and won no seats in the provincial legislature. However, Goodale was the only Liberal candidate to receive more than 1,000 votes.[5]

The party won 9.99% of the vote in the 1986 provincial election, but only Goodale was elected to the legislature. Goodale ran on a platform of fiscal responsibility in this election, arguing that both the Progressive Conservative and New Democrat (NDP) parties favoured excessive spending policies, typified by their proposals for a Keynesian-style stimulation of the provincial economy through subsidized home improvement and renovation schemes.[citation needed]

Goodale resigned as leader to run for the federal Liberals in the 1988 election for the seat of Regina—Wascana, but he was narrowly defeated by former Regina mayor Larry Schneider, who later went on to serve briefly in Kim Campbell's cabinet. Beginning earlier that year and prior to his resignation, Goodale's executive assistant was Jason Kenney. Kenney would become a Conservative Party of Canada MP in a Calgary riding and later Premier of Alberta.[citation needed]

Goodale then spent five years in the private sector, working for companies such as the Pioneer Life Assurance Company, Pioneer Lifeco Inc., and Sovereign Life Insurance Co.; he has stated in interviews that he felt his political career had ended.[citation needed] 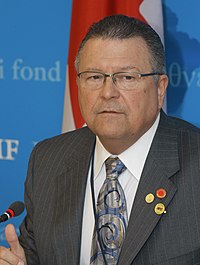 Goodale contested Regina-Wascana again in the 1993 federal election and was elected as part of the Liberal landslide that year. As a member of the new Chrétien cabinet, Goodale was named Minister of Agriculture and Agri-Food. He has the prenominal "the Honourable" and the postnominal "PC" for life by virtue of being made a member of the Queen's Privy Council for Canada on November 4, 1993.[6] He has been reelected for this riding, known as Wascana from 1997 to 2015, at every election since then.

In 1997, he became the Minister of Natural Resources. In May 2002, he was named Minister of Public Works and Government Services, a few weeks after the Auditor General Sheila Fraser issued a report accusing the department of inappropriate contracting practices.[7] This began the exposure of the Sponsorship scandal.[citation needed]

A close ally of Paul Martin, Goodale was appointed to the senior portfolio of Finance Minister when Martin became Prime Minister on December 12, 2003. In that capacity he tabled two consecutive balanced budgets and launched the Government's productivity agenda.[citation needed]

On December 28, 2005, a letter surfaced from Royal Canadian Mounted Police (RCMP) Commissioner Giuliano Zaccardelli confirming the force was launching a criminal investigation into whether details regarding government tax policies relating to income trust funds were leaked from the Finance Minister's office. Goodale said he would co-operate completely with any investigation, but would not step aside while the RCMP continued their probe. The investigation dealt only with the Department of Finance, and not the minister himself.[8] On February 15, 2007 the RCMP announced the conclusion of the income trust investigation and laid a charge of 'Breach of Trust' against Serge Nadeau, an official in the Department of Finance,[9] who pleaded guilty in 2010.[10] Goodale was cleared of any wrongdoing,[11] and blamed the NDP's Judy Wasylycia-Leis for sabotaging the Liberals in the 2006 election.[12]

Goodale was re-elected to the House of Commons in the general election on January 23, 2006 but lost his cabinet position with the Liberal defeat. He was named Opposition House Leader by interim Liberal leader Bill Graham in 2006, and continued to serve in this role under the leadership of Stéphane Dion and Michael Ignatieff until September 2010 when he was promoted to Deputy Leader.[citation needed]

After the Liberals' defeat and Paul Martin's election night announcement that he would be resigning as party leader, Goodale initially indicated that he was not interested in succeeding Martin in that post. "I do not anticipate ever having to cross that bridge," he said. "I rule it out."[13] On March 13, 2006, the Toronto Star reported that Goodale was reconsidering his decision, and stated that he may enter the Liberal leadership election after all.[14] In the end, he declined, citing his inability to speak French as a key reason. On November 28, 2006, he endorsed Bob Rae to be the next leader of the Liberal Party.[15] After the third ballot, Bob Rae, who finished third, was eliminated. Goodale then endorsed Stéphane Dion, the eventual winner.

Goodale was opposed to David Orchard's candidacy in the by-election for Desnethé—Missinippi—Churchill River.[16] Dion terminated the nomination contest and appointed Joan Beatty as the candidate.

Goodale was re-elected once more in the fall of 2008. One month later, in November 2008, the three opposition parties in the Canadian parliament indicated their intention to defeat the Stephen Harper government in a motion of no confidence, and expressed their desire for Governor General Michaëlle Jean to ask a member of the opposition to form a new government. While there was initially some speculation that Goodale would become Prime Minister of Canada as leader of the proposed coalition government,[17] the coalition agreement simply made "the leader of the Liberal Party" Prime Minister. The Liberals agreed shortly after that Stéphane Dion would lead the government on an interim basis until a new Liberal leader was chosen.[18] In the end, parliament was prorogued by Jean at the request of the prime minister before a confidence vote could be put to the house. By the time parliament resumed in January 2009, Michael Ignatieff had become interim leader of the party. He did not seek to bring down the government and agreed to support Harper's budget with amendments.[citation needed]

Goodale was one of the 34 Liberal MPs who was returned in the 2011 federal election, the worst showing by the Liberal Party of Canada in history.[citation needed]

The NDP surpassed the Liberals in number of seats, becoming the official opposition, resulted in priority in choosing parliamentary offices. They requested that Goodale forfeit his suite in the coveted Central Block. The Liberals saw this as a measure of disrespect to Goodale, noting that he had seniority as a former cabinet minister and house leader, despite this being standard practice and noting the Conservatives had not asked any Liberals to give up their offices.[12]

The Liberals won a majority government in the 2015 federal election, and Goodale was re-elected to a ninth term in the House of Commons, once again representing Regina—Wascana as a consequence of redistricting. He was named Minister of Public Safety and Emergency Preparedness by Prime Minister Justin Trudeau.[19] He is the only MP to serve in government with both Pierre and Justin Trudeau.[20] Mr Goodale has announced that he will seek re election in the 2019 federal election.

An order in council on November 4, 2015,[21] places Goodale as first in line to assume the prime minister's powers & duties as acting prime minister, should Prime Minister Justin Trudeau become incapacitated. Trudeau did not appoint a deputy prime minister.

Despite having represented the riding since 1993, Goodale was defeated in the 2019 federal election by more than 16 percentage points.[citation needed]