Rainer Mahlamäki (born 12 June 1956) is a Finnish architect, president of the Finnish Association of Architects (SAFA) from 2007 to 2011, Professor of Contemporary Architecture at the University of Oulu, and joint partner with Ilmari Lahdelma of the Helsinki-based architecture firm Lahdelma & Mahlamäki Architects, one of the most prolific such firms in Finland. A significant part of their work started as entries in architectural competitions, in which they have received 35 first prizes (and 59 other prizes).[1]

Mahlamäki was the Chair of the Jury for the 2009 International Architecture Awards.[2] 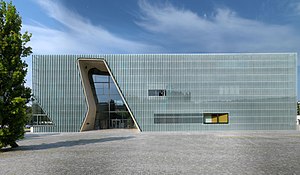 Lahdelma & Mahlamäki, Museum of the History of Polish Jews in Warsaw, Poland (2013).

The work of the firm Lahdelma & Mahlamäki Architects is generally split between the two partners, though with each having some input in all the works. The style of the firm has been described as contextual, varying dramatically in character depending on the project, from minimalism to expressionism. The contextualism is typified by Lahdelma's design of the Jyväskylä University Teacher Training School (2002) built adjacent to several buildings on the university campus designed by Alvar Aalto. The form of the new building complex was generated by the "site lines" of the surrounding buildings, resulting in a "fortress-like" appearance.[3]