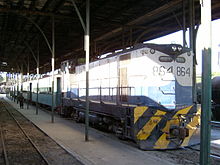 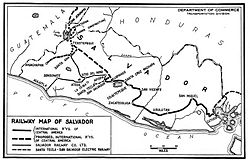 The first railroad in El Salvador was opened between Sonsonate and the port of Acajutla on June 4, 1882. In the following years, the lines extended to Santa Ana, San Salvador and other places. Parts of network were managed separately by The Salvador Railway Company Limited (later nationalized and renamed FES - Ferrocarril de El Salvador) and IRCA - International Railways of Central America (a United Fruit company, later nationalized and renamed FENASAL - Ferrocarril Nacional de El Salvador). In 1975, based on a governmental decree, the two companies merged into FENADESAL - Ferrocarriles Nacionales de El Salvador, managed and administered by CEPA (port authority) on behalf of the state.[2]

All rail transport was suspended in October 2002. Passenger trains between San Salvador and Soyapango were briefly restored from October 2004 until April 2005 to help alleviate traffic congestion after a collapse of a road bridge which connected these two cities.[3]

In 2006 CEPA presented a pilot scheme for reviving the rail network. Commuter services could be introduced between San Salvador and Apopa, requiring the refurbishment of seven passenger vehicles.[4]

In November 2007 the CEPA plan was put into effect and the service to Apopa was restarted with two return trips each morning and evening aimed at commuter traffic. The fare is on 10¢ US for the 12 km trip, and to ensure safety four police officers ride each train (service suspended from 2013). The plan is to reopen the whole route to the provincial capital of Sonsonate in stages over the next 12 months with the next stage to Nejapa due to reopen in March.