Radford University is a public university in Radford, Virginia. It is one of the state's eight doctorate-granting public universities. Founded in 1910, Radford offers curricula for undergraduates in more than 100 fields, graduate programs including the M.F.A., M.B.A., M.A., M.S., Ed.S., Psy.D., M.S.W., and specialized doctoral programs in health-related professions.[3]

The State Normal and Industrial School for Women at Radford was founded in Radford as a women's college in 1910.[4] In 1924, the school was renamed the State Teachers College at Radford, with the primary intent of training teachers in the Appalachian region. In 1943, as part of the state's consolidation movement, the college merged with the Virginia Polytechnic Institute and State University in nearby Blacksburg, serving as the larger university's women's campus.[4] The merger dissolved in 1964, and following a period of sustained and significant growth, Radford College was granted university status in 1979.[4] In 2008, the Virginia General Assembly authorized three doctoral programs at Radford University, and the first doctoral degrees were awarded in 2011.[5]

Radford University's current president is Brian Hemphill, who has served in that role since July 2016. The university's administration is overseen by a 15-member board, whose members are appointed by the Governor of the Commonwealth and serve four-year terms. Each year, the Board also selects a student and a faculty member to serve as advisory representatives on the Board. 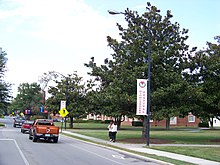 A view of Radford's campus

The university has a student/faculty ratio of 18:1 with an average class size of 31.[6]

Within the colleges, some fields are designated as "schools", such as the School of Nursing and School of Social Work (in the College of Health and Human Services) and the School of Communication (in the College of Humanities & Behavioral Sciences). The latter brings together former departments of media studies (journalism, broadcasting, web design, and advertising) and communication (speech-language pathology and public relations).

The College of Graduate Studies and Research offers 18 degree programs in fields such as art, business, communication, counseling, criminal justice, education, English, music, nursing, occupational therapy, physical therapy, psychology, and social work.[9] The State Council of Higher Education for Virginia has authorized three doctoral programs at Radford in counseling psychology, physical therapy and nursing practice. The Doctor of Psychology (Psy.D.) program in Counseling Psychology admitted its first students in the fall of 2008. The doctorate in physical therapy program began in the summer of 2009. The first Doctor of Nursing Practice students began studies in an online program in the fall of 2010.[10]

Radford University is an 204-acre (0.83 km2) campus located in a residential area of Radford, Virginia. The town is located in the Virginia Highlands, between the Blue Ridge and Allegheny mountains at a double bend in the New River. Nearly all of the 31 administrative, academic, student services, and residence halls, many built in a red-brick Georgian style, are located on three quadrangles and a pedestrian thoroughfare in a 76-acre (310,000 m2) area, while a large adjoining area along the New River holds the university's athletic facilities, student parking lots, and student apartments. The university opened a new COBE building (College of Business and Economics) in 2012.[11] In 2014 a New Student Fitness Center opened. A new Center for Sciences opened during the spring semester of 2016. The following fall semester, the new CHBS (College of Humanities and Behavioral Sciences) Building opened its doors. As of 2016, nearly all dorms at Radford have been renovated. Renovations are currently ongoing for several buildings on campus. Radford is located on exits 105 and 109 of Interstate 81, with accessibility to nearby I-77.

Bordering the Little River, and about five miles from campus, is the Selu Conservancy, a 376-acre (1.52 km2) reserve, observatory, retreat, and conference center owned by the University Foundation.[12]

Radford has a variety of Greek life fraternities and sororities. More than 17 religious and organizations are part of the Radford University Campus Ministers' Association (RUCMA). They hold religious events, masses, and ceremonies throughout the academic year.

The Radford Baseball Team has won the Big South Conference Championship in 2015, and 2017. In 2015, they defeated the Chanticleers of Coastal Carolina with a walk-off single by Hunter Higgerson. The team finished with a final record of 45–16. The team was selected to compete in the Nashville Regional where they went 2–2, with wins against Lipscomb University and Indiana University, before losing to the 2015 National Runner-up Vanderbilt University, in the Regional Finals.

Student athletes have exclusive use of the Dedmon Center, a recreational and convocation complex that opened in 1981. The Dedmon Center features a 1/6-mile indoor jogging track, a weight-training room, locker rooms, and several team rooms. The main arena features a basketball floor and a secondary volleyball arena for intercollegiate competition with four recreational courts for basketball or volleyball. Adjoining facilities include intramural soccer, football, softball fields, and intercollegiate fields and courts for baseball, softball, field hockey, and tennis. The Patrick D. Cupp Stadium adds an intercollegiate soccer, lacrosse, and track and field complex.