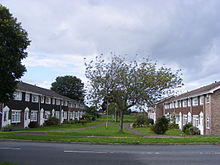 An example of Radburn design housing in Abbeydale, Gloucester, England with Redpoll Way (left) facing Redstart Way across a green space. Road access is to the rear of the houses. 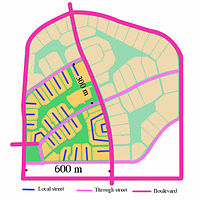 A diagram showing the street network structure of Radburn and its nested hierarchy. (The shaded area was not built)

The design is typified by the backyards of homes facing the street and the fronts of homes facing one another, over common yards.[1][2] It is an offshoot of American designs from the English garden city movement and culminated in the design of the partly-built 1929 Radburn estate.[3]

In the US, the Radburn idea reached its ultimate expression in Los Angeles, California, with the design and construction of Clarence Stein and Robert Alexander's Baldwin Hills Village, now known as 'The Village Green'. It opened as apartments for lease to the public on December 7, 1941. Between 1973 and 1978, it was transformed into an HOA community of 629 unit-owners. It has been designated a National Historic Landmark.[4]

It is often referred to as an urban design experiment that is typified by failure because of its laneways being used as common entries and exits to the houses, helping to isolate communities and to encourage crime. There have been efforts to 'de-Radburn' or demolish some Radburn designed public housing areas in Australia.[5]

When interviewed in 1998, the architect responsible for introducing the design to public housing in New South Wales, Australia, Philip Cox, was reported to have admitted with regard to a Radburn-designed estate in the suburb of Villawood: "Everything that could go wrong in a society went wrong.... It became the centre of drugs, it became the centre of violence and, eventually, the police refused to go into it. It was hell."[5]

The impact of Radburn's urban form on energy consumption for short, local trips was considered in a 1970 study by John Lansing of the University of Michigan.[6] The study found Radburn's design to have important implications for energy conservation: 47% of its residents shopped for groceries on foot, compared to 23% for Reston, Virginia (another Radburn-type development but more car-oriented) and only 8% for a nearby, unplanned community.

Walt Disney was influenced by Radburn and the works of Howard in his planning for Disneyland, Walt Disney World, more specifically, his original vision of the Experimental Prototype Community of Tomorrow (concept) (EPCOT). Disney incorporated the pedestrian pathway concept into his own future city planning: "Children going to and from schools and playgrounds will use these paths, always completely safe and separated from the automobile."

Other Radburn innovations that Disney would look to incorporate into his plans for EPCOT were cul-de-sacs, collector streets and common open spaces within superblocks.[7]

In Canada, the Radburn concept was used in the late 1940s and early 1950s in Westmount Subdivision in Halifax and in Winnipeg, Manitoba in three communities: Wildwood Park in Fort Garry, consisting of ten bays (loop streets), Norwood Flats in St. Boniface, consisting of four bays, and Gaboury Place, a single bay in St. Boniface – totalling several hundred single-family houses, all facing sidewalks and green spaces and backing onto short bays. Today, as in Halifax, they are considered to be desirable middle to upper-middle income neighbourhoods to reside in. Clarence Stein incorporated Radburn design principles into the plan of Alcan company town Kitimat, British Columbia in the 1950s, and the developers of Varsity Village and Braeside, subdivisions in Calgary, Alberta also used the Radburn model in the late 1960s.[citation needed]

In Australia, the Radburn model was used in the planning of some Canberra suburbs developed in the 1960s, in particular Charnwood, Curtin and Garran, and a small part of Hughes. In 2014, with plans for demolition of houses under the Mr Fluffy asbestos home demolition scheme being developed, it was realised that a significant number of the houses treated with loose asbestos, and thus affected, were in the Radburn areas.[8]

In Western Australia it was used in the 1970s in the southern suburb of Thornlie in what is known as the Crestwood Estate. Today the estate is considered to be a successful implantation of the Radburn principles. It also inspired the design of South Hedland which clustered four residential neighbourhoods around a commercial core.[9] The design was quickly considered a failure by residents and government authorities and abandoned in 1974.[10]

It was also used in the Melbourne suburb of Doncaster East in an area known as the Milgate Park Estate.[citation needed] The design was also applied in the 1970s in Minto, an outer suburb of Sydney, Australia where it was one of a number of factors leading to serious social problems on the estate.[1] In New South Wales the then Housing Commission used the Radburn concept in numerous new estates built in the mid to late 1960s and early 1970s. Many of the medium density dwellings are being 'turned around' by lowering the road side 'rear' fence and fencing off the 'front yards that share a communal space.[when?][citation needed]

The lane ways have long been a problem giving local youth a place to hide and evade motorized police patrols while launching raids into homes virtually unobserved.[dubious – discuss][citation needed] One benefit of this plan not often mentioned is that it allows for narrower streets in the cul-de-sacs that serve the backs of the houses. This means lower costs as less bitumen, piping and cabling is needed to service the homes. In major Radburn areas such as Mt Druitt in Sydney the current Housing NSW are selling off many of their properties as they pass their economical maintenance life and begin to cost more than they are worth. Other properties, particularly the blocks of flats often housing the less affluent and educated are being demolished and new medium density developments built in their place. These are being given to the aged and (specifically migrant) families rather than the former residents, many of whom were on parole or being reintroduced to the general community after treatment for various psychiatric disorders.[citation needed] 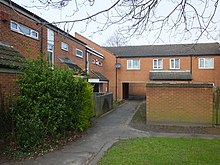 The Orchard Park Estate, Hull, UK was built beginning 1963 to the Radburn design, with several other council estates in the city following that pattern - most notably Bransholme.[2] At Skelmersdale, UK the Radburn design layout was explicitly blamed by residents for problems of antisocial behaviour; specifically that unobserved rear parking gave areas prone to crime.[12] In The Meadows, Nottingham the model also led to anti-social behaviour problems : Nottingham City Council has stated that "the problems associated with the layout of the New Meadows Radburn style layout... contribute to the anti-social behaviour and crime in the area."[13]

In the new town of Hemel Hempstead the Grove Hill neighbourhood, one of the seven planned neighbourhoods, was partly designed using the Radburn model. The Stanshawe Estate (at one time the largest private estate in Europe), in the south-west of Yate, South Gloucestershire in England was developed using the Radburn model. Parts of Abbeydale in Gloucester surrounding the Heron Way spine road have been built using the Radburn design. Elsewhere in England the model was employed in an extension to Letchworth Garden City and in the New Town of Bracknell, particularly in the neighbourhoods of Great Hollands, Wildridings and Hanworth.[citation needed]