Radboud University (abbreviated as RU, Dutch: Radboud Universiteit, formerly Katholieke Universiteit Nijmegen) is a public Roman Catholic university with a strong focus on research located in Nijmegen, the Netherlands. The university bears the name of Saint Radboud, a 9th century Dutch bishop who was known for his intellect and support of the underprivileged.

Established in 1923, Radboud University has consistently been included in the top 150 of universities in the world by four major university ranking tables. As of 2019, it ranks 104th in the Shanghai Academic Ranking of World Universities.[6] Internationally, RU is known for its strong research output. In 2019, 447 PhD degrees were awarded, and 7.571 scientific articles were published.[7] To bolster the international exchange of academic knowledge, Radboud University joined the Guild of European Research-Intensive Universities in 2016.

Located on a green campus in the southern Heyendaal neighbourhood of Nijmegen, the campus houses 7 faculties that conduct teaching and research in Arts, Law, Management, Medical Sciences, Social Sciences and Theology, Philosophy and Religious Studies. In addition to these faculties, the campus also hosts the Max Plank Institute for Psycholinguistics, a word class research centre devoted to the understanding of human language and communication.

The first University of Nijmegen was founded in 1655 as the Kwartierlijke Academie van Nijmegen. Students developed their skills in the traditional fields of theology, medicine and law. Although the university had its successes, the Kwartierlijke Academie terminated around 1680. The university was unable to recover from successive outbreaks of the plague and the French invasion of the Netherlands in 1672.[10]

After several attempts to establish a new university in Nijmegen, the Radboud University Nijmegen was established in 1923 as the Katholieke Universiteit Nijmegen (Catholic University of Nijmegen). It was founded by the Saint Radboud Foundation, a network of bishops that wished to emancipate Catholic intellectuals in the Netherlands.[10] At the time, Dutch Roman Catholics were disadvantaged and occupied almost no higher posts in governmental and scientific institutions. The establishment of a university was seen as a possible stepping stone for these individuals.

The official opening of the Catholic University of Nijmegen in 1923. The academic bedel walks with the new professors to the Saint Ignatius Church.

The first years after the establishment of 1923 were rather successful, but during the Second World War the young university was hit hard. Many prominent members were lost, among them professors Robert Regout and Titus Brandsma who opposed Nazi rule. They were deported to Dachau concentration camp and died there. Meanwhile, students of the Catholic University of Nijmegen were prompted to sign declarations of loyalty to the Germans occupiers. Rector Bernard Hermesdorf however, was the only Rector Magnificus in the Netherlands to refuse to have his students sign these declarations of loyalty.[10]

Classes resumed again in March 1945, when Nijmegen was freed. Because many university buildings had been bombed during the war, there existed a need for new facilities. In 1951, the Faculty of Medical Sciences was the first faculty to move to estate Heyendaal in the southern part of Nijmegen.[11] Soon, the university acquired more land in this area to house the others faculties as well. In 1988 all faculties had been moved to the new campus at Heyendaal. Since the end of the war, student numbers rose steadily from 3,000 in 1960 to 15,000 in 1980. As of October 2019, the university is host to 22,976 students, of whom 10,6% are international students.[12]

In 2004, the university changed its name from Catholic University of Nijmegen to Radboud University Nijmegen, honoring Saint Radboud of Utrecht, a bishop who lived around 900.[13]

Radboud University is organized in seven faculties that offer programmes and courses in the fields of humanities, social sciences, natural sciences, medical sciences, law, management, philosophy, theology and religious studies. Each faculty (cf., College in the USA or School in Europe) is a formal grouping of academic degree programmes, schools and institutes, discipline areas, research centres, and/or any combination of these drawn together for educational purposes. 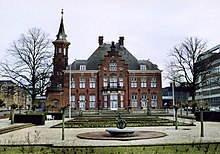 Heyendaal castle (now serving as the Faculty Club of the university) is of old the center of Heyendaal estate, where later on most Radboud University buildings have been established.

A view of the Radboud University law faculty in the summer.

Featured prominently on the west side of the university's Heyendaal campus is the Heyendaal castle. It borders the Radboud University Medical Center, a large teaching hospital located on the campus, which is linked to the university's medical department. Bordering the university hospital is the Huygens Building, which houses the Faculty of Natural Sciences. The Erasmus Tower, which contains the Faculty of Arts, is situated at the south end of the campus next to the Radboud Sports Centre (RSC). The Erasmus Tower and the RSC border the Elinor Ostrom building, which is home to the School of Management and also encompasses the political sciences and economics faculty staff. On the other side of the Erasmus Tower, a number of general lecture halls are located along with the campus pub and bookshop. Beyond this area, one finds the modern Maria Montessori building, home to the Faculty of Social Sciences and the Grotius building, home to the Faculty of Law.

Radboud University is noted for its green campus, often listed among the most attractive in the Netherlands.[14][15]

The university is currently undertaking major efforts to renew and refresh its campus:

In 2017, a SPAR minimarket was opened in the Erasmus building which provides students with snacks and accessories.[20] The university campus borders the campus of the HAN vocational university, which in turn is located next to Heyendaal train station. Frequent shuttle buses connect the university to Nijmegen Central Station and the city centre.

An aerial view of the Huygens buildings of the Faculty of Natural Sciences, with the Erasmus Tower in the back

Radboud University has seven faculties and enrols over 22.000 students in 112 study programs (46 bachelor's and 75 master's programs).[21]

As of September 2019, the university offers 36 international master's programs taught in English and several more taught in Dutch. There are nine bachelor's programs taught fully in English: American Studies, Artificial Intelligence, Biology, Chemistry, Computing Science, International Economics & Business, International Business Administration, English Language and Culture, Philosophy, Politics and Society and Molecular Life Sciences. International Business Communication, History, Psychology and Arts and Culture Studies offer English-language tracks. All other bachelors are in Dutch, although most of the required literature is in English. Some exams, papers and even classes may be in English as well, despite the programs being Dutch-taught. All master's programs have been internationally accredited by the Accreditation Organization of the Netherlands and Flanders (NVAO).

All English-taught Master's programmes are research-based programmes. They are taught within the Faculties of Arts, Law, Social Sciences, Medical Sciences, Sciences and Philosophy, Theology and Religious Studies, besides the Interfaculty Research school and the Nijmegen School of Management.[22]

Radboud University has been named best broad university in the Netherlands for the past seven consecutive years.[28] The physics department is considered top tier. A recent accomplishment is its contribution to the first picture of a black hole.[29] The Faculty of Law is nationally unrivaled in its research in business and law,[30] and retains strong international ties with other prominent research institutions, such as Bologna, Nice and Oxford. The Faculty of Law's European Law School and Notarial Law departments are considered best in class in the Netherlands,[31][32] just as Political Sciences, Sociology and Theology programmes in their respective fields.[28]

In 1923, when the Catholic University of Nijmegen was founded, every student automatically became part of student corporation Carolus Magnus, named after the Frankish king, Charlemagne, who resided in Nijmegen. This corporation was constructed to advocate for the needs of students and take care of the yearly initiation ceremony for new students. Carolus Magnus wished to attain the same status as other corporations in the well-known Dutch student cities of Leiden, Delft and Groningen. To the horror of the Catholic University’s management, it also pursued the same liberal elitist character as these other corporations. Still, Carolus Magnus continued developing and students eagerly participated. In the 1920s it produced its own sociëteiten: male students became part of Gentleman’s Society Roland (1928) and female students joined Lady’s Society Lumen Ducet (1929). Students of these sociëteiten that felt particularly close to each other united in smaller communities called disputen.

After the war student numbers at the Catholic University rose steadily, so did the number of disputen, sociëteiten and sport/cultural associations. In 1947, Rowing Association Phocas was founded and in 1957 Cultural Association Diogenes emerged. Umbrella organization Carolus Magnus became increasingly bloated and lost connection with the members of sociëteiten and disputen that began to operate more independently. In the 1960s Carolus Magnus received severe criticism. The student population had become more diverse, left-leaning and less elitist. The hippie movement had reached Nijmegen and many students wanted a more democratic student life. Carolus Magnus was not the beloved corporation it used to be and slowly became more concerned with administrative duties than organizing community activities. In 1966 Carolus Magnus ceased to exist in its traditional sense. From that moment on, students were free to choose which association they joined and which not.

The administrative and advocacy duties of Carolus Magnus were handed over to a new student senate named AKKU. The fun and community related duties of Carolus were transferred to Gentleman's Society Roland and Lady's Society Lumen Ducet that merged in 1973 under the known name of Carolus Magnus. In the 1980s and 1990s other kinds of student associations were established in Nijmegen, such as evangelical-christian association Navigators, and egalitarian association Ovum Novum. In 2005 Karpe Noktum emerged as the first alternative student association in Nijmegen.

At the Radboud Sports Centre (RSC) students are welcome 7 days a week. During its opening hours students can choose between at least 80 different sports. In addition to the facilities of the Radboud Sports Centre, Radboud University also boasts more than 35 student sport clubs such as the Radboud Rangers (baseball), Obelix (rugby), Apelliotes (hockey) and FC Kunde (soccer). Phocas (rowing) and De Loefbijter (sailing) are by far the biggest sport clubs in Nijmegen. Next to their sport related activities, they also host several parties. 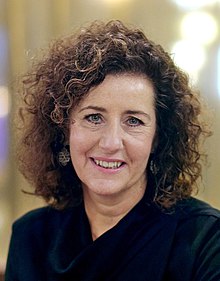 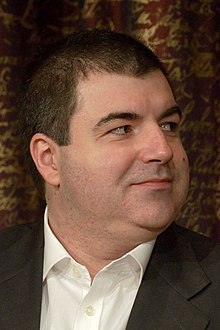 The following is a partial list of notable alumni of Radboud University:

The following is a partial list of notable faculty of Radboud University: