Exo, officially known as Réseau de transport métropolitain (RTM; English: Metropolitan Transportation Network), is a public transit system in Greater Montreal, including the Island of Montreal, Laval (Île Jésus), and communities along both the North Shore of the Mille Îles River and the South Shore of the St. Lawrence River. It was created on June 1, 2017, taking over from the Agence métropolitaine de transport. The RTM operates Montreal's commuter rail and metropolitan bus services, and is the second busiest such system in Canada after Toronto's GO Transit. In May 2018, the erstwhile Réseau de transport métropolitain (RTM) rechristened itself as Exo.[3]

Exo's territory is concurrent with Montreal Metropolitan Community limits, with the addition of the Kahnawake First Nations reserve and the city of Saint-Jérôme.[4] It serves a population of approximately 4.1 million people who make more than 750,000 trips daily in the 4,258.97 km2 (1,644.40 sq mi) area radiating from Montreal.

Exo's mandate includes the operation of Montreal's commuter rail service, which links the downtown core with communities as far west as Hudson, as far east as Mont-Saint-Hilaire, as far south as Candiac, and as far north as Saint-Jérôme and commuter buses formerly operated by local operators. 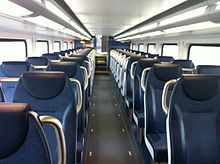 The interior of an Exo commuter train

Exo's commuter trains are its highest-profile division. It has two types of trains: electric multiple unit (EMU) trains, used on the Deux-Montagnes line, and diesel-electric push-pull trains, used on all the others. The Deux-Montagnes line was electrified because of the 4.8 km (3 mi) long poorly ventilated tunnel under Mount Royal to Central Station. Diesel trains through the tunnel were at one time restricted and are now prohibited; the diesel-powered trains of the Mont-Saint-Hilaire line, Via Rail and Amtrak all arrive at Central Station from the direction opposite the tunnel.

The Deux-Montagnes line, including trackage and all infrastructure, as well as the Mount Royal tunnel, is fully owned by the RTM.[5]

Operation of all commuter rail was provided by contract to CN and CP (on their respective rail networks) until June 30, 2017. Operations were taken over by Bombardier Transportation beginning July 1, 2017, on an 8-year contract.[6]

The train lines are integrated with the bus and Metro network maintained by the Société de transport de Montréal (STM).

The greater Montreal area is divided into 8 fare zones. Starting from downtown Montreal, they stretch outwards in all directions. The first three zones are within the cities of Montreal, Laval and Longueuil only. The commuter train fare system is based on the assumption that the user is travelling to or from downtown. It is the same price, for example, to travel within zone 3 or from zone 3 to zone 2 as opposed to travel from zone 3 to zone 1.

To use the train, passengers must have a validated TRAM or TRAIN fare that covers the furthest zone travelled. TRAM fares provide access to the Montreal Metro and buses within the fare zone without any additional payment while the TRAIN fares are only valid on commuter trains. Tickets can be purchased individually or in a six-trip card Single and 6-trip TRAM fares are available for zones 1, 2, and 3 only, and are valid only on STM buses. Regular users can get a monthly pass if they have an OPUS card. Tickets and passes for commuter trains are valid for any line, as long as the ticket is used within 120 minutes from the time of purchase or validation. Travel is limited to the zone for which the ticket is purchased, or any lower-numbered zone, but not a higher-numbered one. For example, a zone 5 ticket is valid for zones 1, 2, 3, 4, and 5, but not zones 6, 7, and 8. Local bus tickets and passes are not valid on commuter trains. There are no faregates; instead, a proof-of-payment system is used, where fare inspectors randomly check tickets.

All fares are available in a cheaper "reduced" category for children 6 to 15 years old, students 16 and 17 years old, and seniors that are 65 or older. Additionally, monthly passes are available in a "student" category (which is cheaper than the regular fare but more than the reduced fare) for students 18 to 25 years old. To benefit from the reduced or student fares, the passenger must have a reduced-fare OPUS card with their name and photo on it. Travel on the commuter trains is free for anyone 5 and under as well as children 6 to 11 years old travelling with an adult.

Following the introduction of the OPUS, smart card system tickets and passes are now sold by automated vending machines at each station. The machines accept cash, credit and debit cards. Purchases of more than $80 must be paid by cards. Tickets and passes are also sold at a few stores near the suburban stations. Consult the full list on the RTM's website.[7][8] Passes are valid for a calendar month, and are normally on sale from the 20th of the previous month to the 5th of their month of validity. Passengers can also subscribe to OPUS+ which automatically debits the passenger's bank account or credit card and adds the pass to the passenger's OPUS card.

Exo has a variety of rolling stock, some of it acquired from GO Transit, the rest built specifically for it. There are a total of 256 cars and locomotives in the fleet.[citation needed]

An MR-90 train on the Deux-Montagnes line 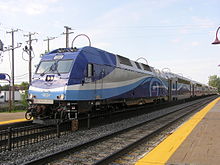 A schedule display board at Mont-Royal station

The 58 Bombardier electrics are exclusively used on the Deux-Montagnes line. These are numbered in the 400s, and operate in married pairs (as only one car in each pair has motors).

The 22 bilevel coaches are in operation on the Saint-Jérôme line. The AMT did not purchase additional bilevels as it sought to standardize its train fleet with the arrival of the multi-level coaches.

On December 18, 2007, the AMT awarded Bombardier a $386-million contract to build 160 multi-level commuter cars. These cars will be based on the multilevel series of NJ Transit, as opposed to the recent purchase of GO-style bilevel cars, and will be able to enter the Mount Royal Tunnel. NJ Transit has a similar technical requirement; Bombardier designed the cars to enter the North River Tunnels between NJ and NYC. They are numbered in the 3000s.

Canadian National (CN) and Canadian Pacific (CP) had long operated commuter trains in the Montreal area, but by the 1980s, their services had dwindled to one route each. The Société de transport de la communauté urbaine de Montréal (STCUM), or Montreal Urban Community Transportation Corporation (MUCTC), which already managed Metro and bus services across the Island of Montreal, assumed management of CN's Deux-Montagnes commuter service and CP's Rigaud service in 1982 as the two railways began scaling back their services.

In 1997, management and financing of both lines was transferred to the newly created Agence métropolitaine de transport (AMT), which had been established to distribute funding and coordinate transportation planning among the numerous transit operators throughout the Greater Montreal Region. Later that year, the AMT inaugurated service between Blainville and Jean-Talon (now Parc) train station in Montreal's Park Extension district, connecting to the Metro at Parc . Originally, the service was designed to provide a temporary alternative for motorists from Laval and the North Shore of Montreal, while the Highway 117 Dufresne Bridge was being repaired. The service proved to be so popular that the AMT continued to fund it, and even extended a number of trains to the Lucien-L'Allier station downtown in 1999, and continues to provide off-peak daytime weekday service on this line. The service was extended further north to Saint-Jérôme in 2007.

In 2000, the AMT inaugurated its service to McMasterville (which runs along a CN line), and later extended it to Mont-Saint-Hilaire in 2002.

In 2001, the AMT initiated a pilot project, launching service on a fifth line (using CP tracks) to Delson. This was later extended to Candiac in 2005. More information about the history of each line can be found in their respective articles.

In 2014, the AMT acquired the entire Deux-Montagnes line from CN, including the right of way, infrastructure, trackage, other railway equipment, grounds, curb lanes, rights in the Mount Royal tunnel and air rights, in a $97 million transaction.[5]

On June 1, 2017, the AMT was disbanded to become the Réseau de transport métropolitain, then Exo, the new agency in charge of operating commuter rail and metropolitan bus services,[14] while the Autorité régionale de transport became in charge of managing, integrating and planning public transportation in Greater Montreal.

Exo runs multiple bus lines through its subsidiaries serving Montréal suburbs. One of them, the Express Chevrier 90, also called Express Terminus Centre-Ville 90 — operated by the RTL in Longueuil (using Van Hool AG300 buses) and links the Brossard-Chevrier Park and Ride in Brossard to the Downtown Terminus.

Exo operates all commuter bus services for the North Shore and South Shore suburbs, excepting the cities of Longueuil and Laval, which have their own transit agencies.

To increase service on the Vaudreuil-Hudson Line, there are plans to add dedicated tracks for commuter trains. The current tracks are used by Exo under permission from Canadian Pacific. On July 1, 2010, service to Rigaud was discontinued, due to Rigaud's reluctance to pay annual fees; the rail line now ends at Hudson.[16]

The possibility of extending the Candiac Line to Saint-Jean-sur-Richelieu and Saint-Philippe was examined by the Quebec Government in 2014. In 2016, the study's final report rejected that option, citing longer travel times by train for people in the area.

Planned by mid-2023, the Deux-Montagnes Line will be converted into a light metro automated system (Réseau express métropolitain); it will no longer be part of Exo's commuter railway system.

As of May 11, 2020, as work on the Réseau express métropolitain intensifies, the Mount Royal Tunnel is no longer available to Exo trains. As a result, the Mascouche and Deux-Montagnes terminate at Ahuntsic and Bois-Franc stations respectively.[17]