The Régence (French pronunciation: ​[ʁeʒɑ̃s], Regency) was the period in French history between 1715 and 1723, when King Louis XV was a minor and the country was governed by Philippe d'Orléans, a nephew of Louis XIV of France, as prince regent.

Philippe was able to take power away from the Duke of Maine (illegitimate son of Louis XIV and Madame de Montespan) who had been the favourite son of the late king and possessed much influence. From 1715 to 1718 the Polysynody changed the system of government in France, in which each minister (secretary of state) was replaced by a council. The système de Law was also introduced, which transformed the finances of the bankrupted kingdom and its aristocracy. Both Cardinal Dubois and Cardinal Fleury were highly influential during this time.

There were seven parts of the Polysynody all of which had their own ministers for the Regency: 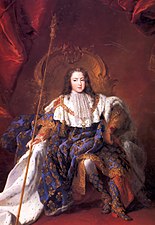 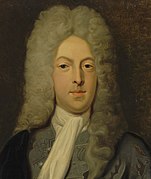 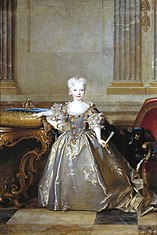 The Infanta Mariana Victoria of Spain 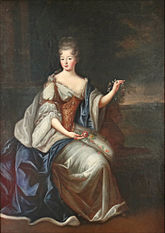 The Régence marks the temporary eclipse of Versailles as centre of policymaking, since the Regent's court was at the Palais Royal in Paris. It marks the rise of Parisian salons as cultural centres, as literary meeting places and nuclei of discreet liberal resistance to some official policies. In the Paris salons aristocrats mingled more easily with the higher Bourgeoisie in a new atmosphere of relaxed decorum, comfort and intimacy.

In the arts, the style of the Régence is marked by early Rococo, characterised by the paintings of Antoine Watteau (1684–1721).

Rococo developed first in the decorative arts and interior design. Louis XIV's succession brought a change in the court artists and general artistic fashion. By the end of the old king's reign, rich Baroque designs were giving way to lighter elements with more curves and natural patterns. These elements are obvious in the architectural designs of Nicolas Pineau. During the Régence, court life moved away from Versailles and this artistic change became well established, first in the royal palace and then throughout French high society. The delicacy and playfulness of Rococo designs is often seen as perfectly in tune with the excesses of Louis XV's regime.

The 1730s represented the height of Rococo development in France. The style had spread beyond architecture and furniture to painting and sculpture, exemplified by the works of Antoine Watteau and François Boucher. Rococo still maintained the Baroque taste for complex forms and intricate patterns, but by this point, it had begun to integrate a variety of diverse characteristics, including a taste for Oriental designs and asymmetric compositions.

The Régence is also the customary French word for the pre-independence regimes in the western North African countries, the so-called Barbary Coast. It was applied to:

French colonial expansion was not limited to the New World, however. In Senegal in West Africa, the French began to establish trading posts along the coast in 1624. In 1664, the French East India Company was established to compete for trade in the east. Colonies were established in India in Chandernagore (1673) and Pondichéry in the south east (1674), and later at Yanam (1723), Mahé (1725), and Karikal (1739) (see French India). Colonies were also founded in the Indian Ocean, on the Île de Bourbon (Réunion, 1664), Isle de France (now Mauritius, 1718), and the Seychelles (1756).