Celsius Temperature Rankine scale
This article is about the temperature scale. For other uses, see Réaumur (disambiguation).
Not to be confused with Rømer scale. 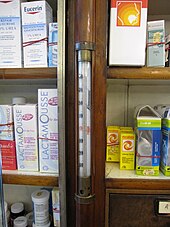 Old thermometer in a pharmacy in Vienna, showing room temperature by Reaumur scale. 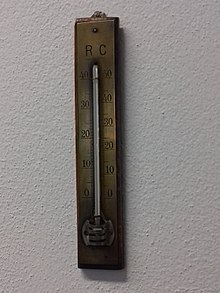 The Réaumur scale (French pronunciation: ​[ʁeomy(ː)ʁ]; °Ré, °Re, °r), also known as the "octogesimal division",[1] is a temperature scale for which the freezing and boiling points of water are defined as 0 and 80 degrees respectively. The scale is named for René Antoine Ferchault de Réaumur, who first proposed a similar scale in 1730.[2]

Réaumur’s thermometer contained diluted alcohol (ethanol) and was constructed on the principle of using 0° for the freezing temperature of water, and graduating the tube into degrees, each of which was one-thousandth of the volume contained by the bulb and tube up to the zero mark. He suggested that the concentration of alcohol employed be such that it began boiling at 80 °Ré — that is, when it had expanded in volume by 8%. He chose alcohol instead of mercury because it expands more visibly, but this posed problems: his original thermometers were very bulky, and the low boiling point of alcohol made them unsuitable for many applications. Instrument-makers generally chose different liquids, and then used 80 °Ré to signify the boiling point of water, causing much confusion. During 1772 Jean-André Deluc studied the several substances then used in thermometers and concluded that mercurial thermometers were the best for practical use; for example, if two equal amounts of water at x and y degrees were mixed, the temperature of the result was then the average of x and y degrees, and this relationship was only reliable when mercury was used. From the late 18th century mercury was used almost without exception.[3]

The Réaumur scale was used widely in Europe, particularly in France, Germany and Russia, and was referenced in the works of Dostoyevsky, Flaubert, Tolstoy, and Nabokov.[4][5][6] For example, at the beginning of Book X of The Brothers Karamazov, the narrator says, "We had eleven degrees of frost", i.e. −11°Ré, equivalent to 7°F or −14°C.[7] By the 1790s, France had chosen the Celsius scale as part of the metric system, rather than the Réaumur measurement,[2] but it was used commonly in some parts of Europe until at least the mid-19th century,[8] and in parts of Russia until the early 20th. Its main modern uses are in some Italian and Swiss factories for measuring milk temperature during cheese production,[9] and in the Netherlands for measuring temperature when cooking sugar syrup for desserts and sweets.