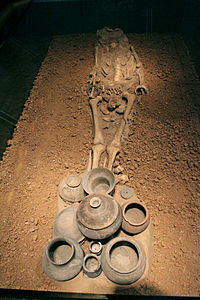 The Qujialing culture (3400–2600 BC) was a Neolithic civilisation centered primarily around the middle Yangtze River region in Hubei and Hunan, China. The culture succeeded the Daxi culture and reached southern Shaanxi, northern Jiangxi and southwest Henan. Artefact types unique to the culture include ceramic balls and painted spindle whorls; the later was inherited by the succeeding Shijiahe culture.

Many of the artefacts from the culture are located in the Hubei Provincial Museum.