The Quirinal Palace (known in Italian as the Palazzo del Quirinale or simply Quirinale) is a historic building in Rome, Italy, one of the three current official residences of the President of the Italian Republic, together with Villa Rosebery in Naples and the Tenuta di Castelporziano, an estate on the outskirts of Rome, some 25 klm from the centre of the city. It is located on the Quirinal Hill, the highest of the seven hills of Rome in an area colloquially called Monte Cavallo. It has served as residence for thirty Popes, four Kings of Italy and twelve presidents of the Italian Republic.

The Quirinal Palace was selected by Napoleon to be his residence par excellence as Emperor.[1] However his permanence never took place because of the French defeat in 1814 and the subsequent European Restoration.[2]

The palace extends for an area of 110,500 square metres and is the eleventh-largest palace in the world in terms of area,[3] some twenty times the area of the White House.

The current site of the palace has been in use since Roman times, as excavations in the gardens testify. On this hill, the Romans built temples to several deities, from Flora to Quirinus, after whom the hill was named. During the reign of Constantine the last complex of Roman baths was built here, as the statues of the twins Castor and Pollux taming the horses decorating the fountain in the square testify. The Quirinal, being the highest hill in Rome, was much sought after and became a popular location for the Roman patricians, who built luxurious villas there. An example of those are the remains of a villa in the Quirinal gardens, where a mosaic, part of the old floor has been found.[citation needed]

Foundation of the current palace 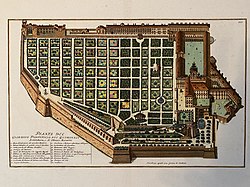 The palace and garden by Giovanni Battista Falda in 1683

The main entrance with Bernini's balcony and portal

The palace, located on the Via del Quirinale and facing onto the Piazza del Quirinale, was built in 1583 by Pope Gregory XIII as a papal summer residence. The pope, who wanted to find a location which was far away from the humidity and stench coming from the river Tiber and likewise the unhealthy conditions of the Lateran Palace, chose the Quirinal hill as it was one of the most suitable places in Rome. On the site, there was already a small villa owned by the Carafa family and rented to Luigi d'Este. The pope commissioned the architect Ottaviano Mascherino to build a palace with porticoed parallel wings and an internal courtyard. That project was not fully completed due to the death of the pope in 1585 but it is still recognisable in the north part of the courtyard, especially in the double loggia facade, topped by the panoramic Torre dei Venti (tower of the winds) or Torrino. To the latter, a bell tower was added according to a project by Carlo Maderno and Francesco Borromini.[citation needed]

From the 17th century

The Courtyard of Honour 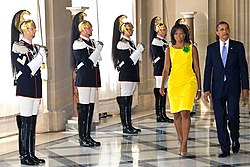 US President Barack Obama and First Lady Michelle Obama at the Quirinal Palace (July 8, 2009 at G8 Summit) with a Corazziere, member of a specialized company of the Carabinieri, Guard of Honor.

Pope Paul V (r. 1605-1621) commissioned the completion of the work on the main building of the palace.

The Palace was also used as the location for papal conclaves in 1823, 1829, 1831, and 1846. It served as a papal residence and housed the central offices responsible for the civil government of the Papal States until 1870. In September 1870, what was left of the Papal States was occupied militarily and annexed to the Kingdom of Italy. Some five months later, in 1871, Rome became the capital of the new Italian state. The palace became the official royal residence of the Kings of Italy, though some of these, notably King Victor Emmanuel III (reigned 1900–1946) actually lived in a private residence elsewhere (Villa Savoia), leaving the Quirinal to be used simply as a suite of offices and for state functions. The monarchy was abolished in 1946 and the Palace became the official residence and workplace for the Presidents of the Italian Republic. Still, some have declined the Colle residence and kept their usual Roman residence: for example, Sandro Pertini preferred his old flat near the Trevi Fountain.

The Palace's façade was designed by Domenico Fontana. Its Great Chapel was designed by Carlo Maderno. It contains frescos by Guido Reni, but the most famous fresco is the Blessing Christ by Melozzo da Forlì, placed over the stairs. The Palace grounds include a famous set of gardens laid out in the 17th century.[4]

The palace is composed of the main building, which is built around the majestic courtyard, with the most beautiful halls of the complex environments that serve as representative of the Presidency of the Republic, while the offices and apartments of the head of state are housed in buildings at the bottom of the Manica Lunga, on the long side via del Quirinale, the top of which lie the opulent imperial apartments, which were specially arranged, decorated and furnished for two visits of Kaiser Wilhelm II (in 1888 and 1893) and which now houses the monarchs or foreign heads of state visiting the President of the Republic.[5] The palace, in its totality, has 1,200 rooms.

The rooms of the palace housed in the main building are:

The Quirinal Gardens, famous for their privileged position that makes of them almost an "island" elevated above Rome, were over the centuries changed depending on the tastes and needs of the papal court.

The current arrangement complements the garden "formal" seventeenth century facing the original core of the building with the garden "romantic" in the second half of the eighteenth century, preserving at that time the elegant Coffee House built by Ferdinando Fuga as reception room of Benedict XIV Lambertini, decorated by beautiful paintings of Girolamo Batoni Pompeo and Giovanni Paolo Pannini.

Within the Quirinal gardens lies the famous water organ[6] built between 1997 and 1999 by Barthélemy Formentelli based on the characteristics of the previous nineteenth century organ. The organ is fed by a waterfall with a jump of 18 meters and has a single keyboard of 41 notes with a first short octave, without pedalboard.

By means of a trap door located in the gardens, entry can be gained to the archaeological excavations that have unearthed the remains of the original temple to the god Quirinus and some insulae of the imperial age.[8][9][10]