Cancún Enlarge Tulum
This article is about the Mexican state. For other uses, see Quintana Roo (disambiguation).
State of Mexico
State in Chetumal, Mexico

Quintana Roo (/kɪnˌtɑːnə ˈroʊ(oʊ)/ kin-TAH-nə ROH(-oh),[8][9] Spanish: [kinˈtana ˈroo]), officially the Free and Sovereign State of Quintana Roo (Spanish: Estado Libre y Soberano de Quintana Roo), is one of the 32 states which compose the federal entities of Mexico. It is divided into 11 municipalities and its capital city is Chetumal.

Quintana Roo is located on the eastern part of the Yucatán Peninsula and is bordered by the states of Campeche to the west and Yucatán to the northwest, and by the Orange Walk and Corozal districts of Belize, along with an offshore borderline with Belize District to the south. As Mexico's easternmost state, Quintana Roo has a coastline to the east with the Caribbean Sea and to the north with the Gulf of Mexico. The state previously covered 44,705 square kilometers (17,261 sq mi) and shared a small border with Guatemala in the southwest of the state.[10][11] However, in 2013, Mexico's Supreme Court of Justice of the Nation resolved the boundary dispute between Quintana Roo, Campeche, and Yucatán stemming from the creation of the Calakmul municipality by Campeche in 1997, siding with Campeche and thereby benefiting Yucatán.[12]

Quintana Roo is the home of the city of Cancún, the islands of Cozumel and Isla Mujeres, and the towns of Bacalar, Playa del Carmen and Akumal, as well as the ancient Maya ruins of Chacchoben, Cobá, Kohunlich, Muyil, Tulum, Xel-Há, and Xcaret. The Sian Ka'an biosphere reserve is also located in the state.

The statewide population is expanding at a rapid rate due to the construction of hotels and the demand for workers. Many migrants come from Yucatán, Campeche, Tabasco, and Veracruz. The state is frequently hit by severe hurricanes due to its exposed location, the most recent and severe being Hurricane Dean in 2007, which made landfall with sustained winds of 280 km/h (170 mph), with gusts up to 320 km/h (200 mph).

Tulum - Temple of the Wind God

The area that makes up modern Quintana Roo was long part of Yucatán, sharing its history. With the Caste War of Yucatán, which started in the 1840s, all non-natives were driven from the region. The independent Maya nation of Chan Santa Cruz was based on what is now the town of Felipe Carrillo Puerto. For decades it maintained considerable independence, having separate trade and treaty relationships with British Honduras, now Belize.

Quintana Roo was made a territory of Mexico by decree of President Porfirio Díaz on November 24, 1902. It was named after an early patriot of the Mexican Republic, Andrés Quintana Roo. The Mexican army succeeded in defeating most of the Maya population of the region during the 1910s. In 1915 the area was again declared to be legally part of the state of Yucatán.

Quintana Roo was granted statehood within the United Mexican States on October 8, 1974.[1]

In 2020, an underwater archaeological expedition led by Jerónimo Avilés again excavated the cave which revealed a female skeleton of an inhabitant who lived in the region at least 9,900 years ago. Dating revealed that the skeleton was probably about 30 years old at the time of death. According to craniometric measurements, the skull is believed to conform to the mesocephalic pattern, like the other three skulls found in Tulum caves. Three different scars on the skull of the woman showed that she was hit with something hard and her skull bones were broken. Her skull also had crater-like deformations and tissue deformities that appeared to be caused by a bacterial relative of syphilis.[14]

According to study lead researcher Wolfgang Stinnesbeck, "It really looks as if this woman had a very hard time and an extremely unhappy end of her life. Obviously, this is speculative, but given the traumas and the pathological deformations on her skull, it appears a likely scenario that she may have been expelled from her group and was killed in the cave, or was left in the cave to die there”.[15]

The newly discovered skeleton was 140 meters away from the Chan Hol 2 site. Although archaeologists assumed the divers found the remains of the missing Chan Hol 2, the analysis proved that these assumptions were erroneous in a short time. Stinnesbeck compared the new bones to old photographs of Chan Hol 2 and showed that the two skeletons represent different individuals.[16]

Due to their distinctive features, study co-researcher Samuel Rennie suggest the existence of at least two morphologically diverse groups of people living separately in Mexico during the transition from Pleistocene to Holocene.[17]

According to the Köppen climate classification, much of the state has a tropical wet and dry climate (Aw) while the island of Cozumel has a tropical monsoon climate (Am).[18] The mean annual temperature is 26 °C (78.8 °F).[19] The hottest months are April and August where the average high is 33 °C (91.4 °F) while January is coldest month with an average low of 17 °C (62.6 °F).[19] Extreme temperatures can range from low of 10 °C (50.0 °F) in the coldest months to 36 °C (96.8 °F) in the hottest months.[18] Quintana Roo averages 1,300 mm (51 in) of precipitation per year, which falls throughout the year, though June to October are the wetter months.[19] Hurricanes can occasionally hit the coastal areas during the hurricane season, particularly from September to November.[18]

The State of Quintana Roo is divided into 11 municipalities (Spanish: municipios), each headed by a municipal president:[22] 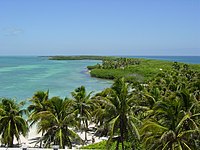 Beach of Punta Sur at south at the Cozumel Island

Quintana Roo's tourist boom began in the 1970s.[23] Tourism resulted in the development of coastal hotels and resorts, in addition to ecotourism inland and in coastal regions, which have increased the development of the region as well as the gross domestic product.[24] Quintana Roo ranks sixth among Mexican states according to the United Nations Human Development index (HDI).[25]

The Riviera Maya is located along the Caribbean coastline, including Cancún, Playa del Carmen, Puerto Morelos, Akumal and Cozumel.

There are a number of Mayan archeological sites in Quintana Roo, including Chacchoben, Coba, Kohunlich, Muyil, San Gervasio, Tulum, Xcaret, Xelha, and Yo'okop.

Biotic situation of the Yucatán Peninsula

The Yucatán Peninsula is one of the most forested areas of the world in terms of biotic mass per hectare.[23] However, anthropological, biological and governmental experts have determined that Quintana Roo is 'facing a faunal crisis'.[23] Many medium to large game animals are disappearing due to hunting and habitat loss. While its population is relatively small, Quintana Roo is experiencing both a population influx and an increase in tourism.[23][25] This only increases the pressure on the plants and animals native to the area.

There are four generalized ecosystems in Quintana Roo—tropical forests, or jungle; savanna, mangrove forests, and coral reefs. One of the byproducts of traditional and large-scale agriculture is the creation of additional habitats, such as second growth forests and fields/pastures.[26] Tourism has caused Quintana Roo to become famous around the world in the last thirty or so years for its beaches, coastline and cenote sinkholes.[27][28] Biological experts consider the coastline of Quintana Roo one of the best manatee habitats worldwide.[29] Queen conchs are also noted for their inhabitation of coastal territory.[29] The wide variety of biotic organisms such as these has decreased drastically in the last fifteen years.[24][30]

Also affected by the loss of habitat due to both agriculture and development, birds are one of the region's most varied animal assets.[23] Hundreds of species reside in Quintana Roo permanently, with hundreds of others either wintering there or using it as a stopover on the long journey into South America.[29] As a result, many birders come to the area annually in search of the rare and unexpected.[23]

Many blame the environmental damage in Quintana Roo on either the regional government or outside investors.[24] However, resorts and hotels in Quintana Roo have created jobs and increased economic activity, which in turn has resulted in growth.[24][30]

Projections for the tourism economy of Quintana Roo were exceedingly optimistic. It houses multiple tourist attractions from the Maya ruins to the lush forests and beautiful beaches. However, the long-term effects were not foreseen. The effect on the local environment was not properly considered. Economic stresses of development and population were virtually ignored.[30] The effect on the native population was not properly considered. The 'economic marginalization' of the Maya has had drastic effects on their sense of place and identity.[24]

The Atlante F.C. was founded in 1916 in Mexico City and they now play football in the Ascenso MX. Their home ground (since 2007) is the Estadio Andrés Quintana Roo in Cancún.[33]

After playing the 1955–2001 seasons in Mexico City and the 2002–2005 seasons in Puebla the Quintana Roo Tigers have been playing baseball with a home field at the Estadio de Béisbol Beto Ávila in Cancún since the 2006 season.[34] The Tigers made it to the Mexican League series in 2009, but lost to the Saraperos de Saltillo 4 games to 2.[35]

On February 1, 2015, Quintana Roo officially adopted a new time zone, Southeastern, which is five hours behind Coordinated Universal Time (UTC−05:00). Quintana Roo does not observe daylight saving time, so Southeastern Time is constant throughout the year (that is, it does not shift forward in the spring and back in the fall). Southeastern Time (ST) is the same as Eastern Standard Time (EST) and Central Daylight Time (CDT). This means that in the winter, Quintana Roo has the same time as regions observing EST, such as the eastern U.S., eastern Canada, Cuba, and Jamaica; and in the summer, Quintana Roo has the same time as regions observing CDT, such as central Mexico.[36][37][38][39][40][41]

Quintana Roo changed to Southeastern Time for economic reasons, including:

Before Quintana Roo adopted the Southeastern time zone (officially referred to as zona sureste in Mexico), it had been part of the Central time zone (zona centro).