Quett Ketumile Joni Masire,[1] GCMG (23 July 1925 – 22 June 2017) was the second President of Botswana, in office from 1980 to 1998.[2][3] He was a leading figure in the independence movement and then the new government, and played a crucial role in facilitating and protecting Botswana's steady financial growth and development. He stepped down in 1998 and was succeeded by Vice-President Festus Mogae, who became the third President of Botswana.[3]

Masire was born on 23 July 1925 in Kanye, Botswana[4][1] into a cattle herding family to Gaipone (née Kgopo) and Joni Masire.[5][6] He grew up in a community where male commoners, such as himself, were expected to become low-paid migrant labourers in the mines of apartheid South Africa. From an early age Masire set himself apart through academic achievement. After graduating at the top of his class at the Kanye school, he received a scholarship to further his education at the Tiger Kloof Educational Institute in South Africa.

In 1950, after graduating from Tiger Kloof, Masire helped found the Seepapitso II Secondary School, the first institution of higher learning in the Bangwaketse Reserve.[7] He served as the school's headmaster for about six years.[7] During this period he clashed with Bathoen II, the autocratic Bangwaketse ruler. Resenting Bathoen's many petty interferences in school affairs, Masire, working through the revived Bechuanaland African Teachers Association, became an advocate for the autonomy of protectorate schools from chiefly authority.

In 1957, Masire earned a Master Farmers Certificate and established himself as one of the territory's leading agriculturalists. His success led to renewed conflict with the jealous Bathoen, who seized his farms as a penalty for the supposed infraction of fencing communal land.

In 1958, Masire was appointed as the protectorate reporter for the African Echo/Naledi ya Botswana newspaper. He was also elected to the newly reformed Bangwaketse Tribal Council and, after 1960, the protectorate-wide African and Legislative Councils. Although he attended the first Kanye meeting of the People's Party, the earliest nationalist grouping to enjoy a mass following in the territory, he declined to join the movement.

In 1961, Masire helped found the Botswana Democratic Party (BDP). He was instrumental in the formation of the party, and served as its first secretary-general.[2]

In 1965, the Democratic Party won 28 of the 31 contested seats in the new Legislative Assembly, giving it a clear mandate to lead Botswana to independence. He was elected to the National Assembly in March 1965 and became Deputy Prime Minister in 1966. Masire became the new nation's Vice-President, serving under Seretse Khama, in 1966.[3] Until 1980 he also held the significant portfolios of finance (from 1967) and development planning (from 1967), which were formally merged in 1971.[9]

As a principal architect of Botswana's steady economic and infrastructural growth between 1966 and 1980, Masire earned a reputation as a highly competent technocrat. However, his local Bangwaketse political base was eroded by his old nemesis Bathoen. During the initial years of independence the Democratic Party government moved decisively to undercut many of the residual powers of the chiefs. As a result, in 1969 Bathoen II a Seêpapitsô abdicated, only to reemerge as the leader of the opposition National Front. This set the stage for Bathoen's local electoral victory over Masire during the same year. However, the ruling party won decisively at the national level, thus allowing Masire to maintain his position as one of the four "specially elected" members of Parliament. 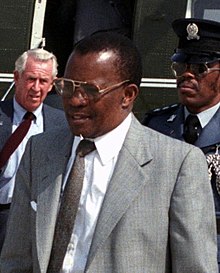 Quett Masire departing after a state visit to the United States in 1984.

Khama died on 13 July 1980, and Masire automatically became acting president per the Constitution.

Five days after Khama's death, Masire was elected as President by secret ballot at the National Assembly on 18 July 1980.[2] Masire's three full terms were characterised by an emphasis on developments through regional and international organisations. Masire was chairman of the Southern African Development Community[2] and vice chairman of the Organisation of African Unity; he was also chairman of the Global Coalition for Africa and a member of the UN group on Africa Development.

On August 7, 1988, while flying with his staff to a summit in Angola, his executive jet was accidentally shot at by an Angolan Air Force MiG-23. The plane was damaged and Masire was injured, but the co-pilot was able to make a successful emergency landing.[10][11]

Following his retirement in 1998, Sir Ketumile Masire was involved in numerous diplomatic initiatives in a number of African countries, including Ethiopia, Lesotho, Malawi, Mozambique, Ghana and Swaziland. Between 1998 and 2000 he served as Chairman of the International Panel of Eminent Personalities Investigating the Circumstances Surrounding the 1994 Rwanda Genocide, and between 2000–2003 was the facilitator for the Inter-Congolese National Dialogue, which had the objective of bringing about a new political dispensation for the Democratic Republic of Congo, in terms of the Lusaka Ceasefire Agreement.

In 2007, Sir Ketumile Masire set up the Sir Ketumile Masire Foundation to promote the social and economic well being of the society of Botswana. The Foundation strives to facilitate and drive efforts to promote peace, good governance and political stability internationally; assist children with disabilities from birth; and promote innovation and alternatives in agriculture.

During the last decade of his life, Masire became increasingly unhappy with the direction of the Botswana Democratic Party and the government of Ian Khama. Events such as the loss of about a fifth of the membership to the breakaway Botswana Movement for Democracy in 2010, and the bitter 2011 BOFEPUSU strike made him question leadership decisions. He came to conclude that the BDP had lost its original ideas, and had instead been taken over by opportunists looking to benefit from senior government positions.[12] As a result, he became estranged from the party for the first time in his life.

Sir Ketumile is also a founding Member of the Global Leadership Foundation, an organization which works to support democratic leadership, prevent and resolve conflict through mediation and promote good governance in the form of democratic institutions, open markets, human rights and the rule of law. It does so by making available, discreetly and in confidence, the experience of former leaders to today's national leaders. It is a not-for-profit organization composed of former heads of government, senior governmental and international organization officials who work closely with Heads of Government on governance-related issues of concern to them.

In May 2010 Sir Ketumile Masire led an African Union Election Observer Mission to the May 2010 Ethiopia Legislative Elections, and in October 2010 he co-led (with fellow GLF Member Joe Clark) a National Democratic Institute pre-election assessment mission in Nigeria, which identified a number of hurdles that could undermine a successful process surrounding the 2011 state and national polls.

He was the chancellor of the University of Botswana from 1982 to 1998.

Masire died at Bokamoso Hospital in Mmopane, Botswana, surrounded by his family, on 22 June 2017 at the age of 91. He had been hospitalized on 18 June after undergoing surgery for an unspecified reason, but his health deteriorated afterwards.[13][14] He was buried on the morning of Thursday 29 June 2017 in his home village Kanye, Botswana.[15]