A queen regnant (plural: queens regnant) is a female monarch, equivalent in rank to a king, who reigns in her own right, as opposed to a queen consort, who is the wife of a reigning king, or a queen regent, who is the guardian of a child monarch and reigns temporarily in the child's stead. An empress regnant is a female monarch who reigns in her own right over an empire. 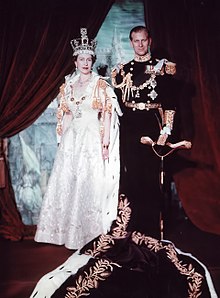 Elizabeth II, Queen of the United Kingdom of Great Britain and Northern Ireland, here with her husband on the occasion of her coronation in 1953

In Ancient Africa, Ancient Persia, Asian and Pacific cultures, and in some European countries, female monarchs have been given the title king or its equivalent, such as pharaoh, when gender is irrelevant to the office, or else have used the masculine form of the word in languages that have grammatical gender as a way to classify nouns. The Byzantine Empress Irene sometimes titled herself basileus (βασιλεύς), 'emperor', rather than basilissa (βασίλισσα), 'empress' and Jadwiga of Poland was crowned as Rex Poloniae, King of Poland.

Among the Davidic Monarchs of the Kingdom of Judah, there is mentioned a single queen regnant, Athaliah, though the Hebrew Bible regards her negatively as a usurper. The much later Hasmonean Queen Salome Alexandra (Shlom Tzion) was highly popular.[citation needed]

Accession of a queen regnant occurs as a nation's order of succession permits. Methods of succession to queendoms, kingdoms, tribal chiefships, and such include nomination (the reigning monarch or a council names an heir), primogeniture (in which the children of a monarch or chief have preference in order of birth from eldest to youngest), and ultimogeniture (in which the children have preference in the reverse order of birth from youngest to eldest). The scope of succession may be matrilineal, patrilineal, or both; or, rarely, open to general election when necessary. The right of succession may be open to men and women, or limited to men only or to women only. 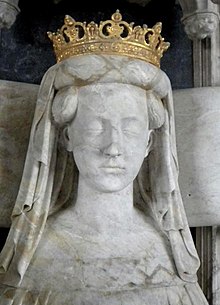 Margaret I ruled Denmark, Norway and Sweden in the late 14th and early 15th centuries.

The most typical succession in European monarchies from the Late Middle Ages until the late 20th century was male-preference primogeniture: the order of succession ranked the sons of the monarch in order of their birth, followed by the daughters. Historically, many realms[which?] forbade succession by women or through a female line in accordance with the Salic law, and some[which?] still do. No queen regnant ever ruled France, for example. Only one woman, Maria Theresa, ruled Austria. As noted in the list below of widely-known ruling queens, many reigned in European monarchies.

In the late 20th and early 21st centuries, Sweden, Norway, Belgium, the Netherlands, Denmark, Luxembourg[1] and the UK[2] amended their laws of succession to absolute primogeniture (in which the children of a monarch or chief have preference in order of birth from eldest to youngest regardless of gender). In some cases, the change does not take effect during the lifetimes of people already in the line of succession at the time the law was passed.

In 2011, the United Kingdom and the 15 other Commonwealth realms agreed to remove the rule of male-preference primogeniture. Once the necessary legislation was passed, this means that had Prince William had a daughter first, a younger son would not have become heir apparent.[3]

In China, Wu Zetian became the Chinese empress regnant and established the Zhou Dynasty after dismissing her sons. The Empress Wu used the title huangdi (皇帝, "emperor") and in many European sources, is referred to as a female emperor rather than an empress regnant. A few decades earlier in Korea, Queen Seondeok of Silla and Jindeok of Silla developed the term yeowang (여왕, "female king") to refer to themselves, using the title instead of wangbi (왕비), which is usually translated as "queen consort" and refers to the wife of a king or emperor.

Although the Chrysanthemum Throne of Japan is currently barred to women, this has not always been the case; throughout Japanese history there have been eight empresses regnant. Again, the Japanese language uses the term josei tennō (女性天皇, "female imperial ruler") for the position which would be "empress regnant" in English, with kōgō (皇后) being the term reserved for an empress consort. The Japanese succession debate became a significant political issue during the early 2000s, as no male children had been born to the Imperial House of Japan since 1965. Prime Minister Junichirō Koizumi pledged to present parliament with a bill to allow women to ascend the Imperial Throne, but he withdrew this after the birth of Prince Hisahito in 2006.