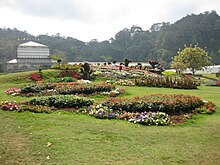 The Queen Sirikit Botanical Garden (QSBG) in Mae Rim District, Chiang Mai Province, Thailand was opened in 1993[1] and is maintained under the auspices of the Botanical Garden Organization (BGO) of the Ministry of Natural Resources and Environment.[2] Originally named the Mae Sa Botanic Garden, it was renamed for Sirikit, Queen of Thailand in 1994.

The 6,500 rai site is home to 12 greenhouses, Thailand's biggest glasshouse complex.[3] It displays plants and flowers year round. It was the first botanical garden of international standard in Thailand and focuses on maintaining biodiversity and promoting environmental conservation.[1]