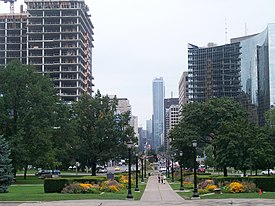 View of the southern portion of the park from the Ontario Legislative Building, a building that is encompassed by the park.

An equestrian statue of Edward VII stands on a large mound at the centre of the northern section of the park, with sidewalks radiating outwards.

The section of the park north of Wellesley Street follows the traditional British design, dominated by large trees that provide extensive cover during summer. Footpaths radiate outwards from an equestrian statue of Edward VII, which stands on a large mound at the centre of the northern section. The statue originally stood in Delhi, India, but was moved to Canada in 1969. The main north-south path runs between the statue and the war memorial of the 48th Highlanders at the park's northern tip. The site is approximately oval; however the southwestern edge of Queens Park "kinks in" somewhat. In the past, this was the bank of Taddle Creek. With the creek long-buried, the kink remains.

The oval park is bounded by Queen's Park Crescent.

Line 1 Yonge-University of the Toronto subway runs below University Avenue, Queen's Park (the park, to one side of the legislature), and Queen's Park (the street), serving the area via its Queen's Park and Museum stations. Other public transit access is provided by the 5 Avenue Road and 94 Wellesley bus routes, and the 506 Carlton streetcar route.

The southern section of the park is the site of the Ontario Legislature, the seat of the provincial government. The grounds contain several monuments commemorating notable historical figures and events. 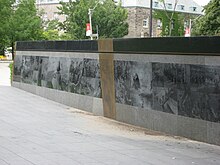 The Ontario Veterans Memorial is one of several on display at the park.

Memorials at Queen's Park includes the North-West Rebellion memorial, the Ontario Police Memorial, the Ontario Firefighter Memorial, the Ontario Veterans Memorial, and the 48th Highlanders of Canada memorial. A sandstone monument with Italian marble figures and bronze plaques was erected on the University of Toronto Campus by the Canadian Volunteer Monument Campaign of 1866, Committee of Toronto citizens and its chairman, Dr. McCaul, then President of the University of Toronto. The Lime Ridge Monument was dedicated to those of (9th Company or University Rifle Corps) The Queen's Own Rifles of Canada regiment who were killed in action or who died from wounds defending her frontier in June 1866.[4]

Two Russian cannons are located outside the legislative building entrance. They were captured by the British during the Crimean War, and sent to Toronto in 1859 as a gift from Queen Victoria. The cannons were originally positioned where the Sir John A. Macdonald's statue is now located, moving to its present location after the statue's completion in 1894. In addition to these memorials, the Queen Elizabeth II Rose Gardens is also located here, in honour of Her Majesty's Silver Jubilee in 1977 and Golden Jubilee in 2002.

The Canadian Volunteer Memorial, honouring militia volunteers who had died fighting against Fenian invaders at the Battle of Limeridge is located just west of Queen's Park in an isolated corner of the University of Toronto campus. Although this monument was in Queen's Park at the time of its unveiling in 1870, it has since been cut off from the rest of the park by the construction of Queen's Park Crescent.[5]