Route 366 is a secondary highway in the Outaouais region of Quebec. It runs from Route 301 near Creemorne in the Pontiac to Route 148 in the city of Gatineau.

The section west of Lac-des-Loups is mostly unpaved. After skirting the northern boundary of Gatineau Park, the highway is briefly concurrent with Route 105 before continuing eastward. Near Val-des-Monts township it overlaps Route 307 for 7 km (4 mi) before veering south towards Gatineau and its terminus with Route 148. 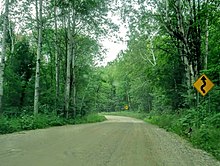