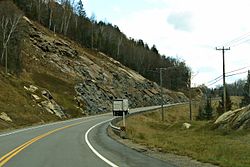 The upgraded Route 323 between Lac-des-Plages and Amherst

Before the bypass was built in 2008, road conditions were often criticized. Several pot holes, and cracks in the asphalt made this narrow road a long trip for many drivers. This section, now bypassing Lac-des-Plages, was opened to traffic in the fall of 2008.[2]

The narrow section northeast of Lac-des-Plages closer to Amherst had many turns and was prone to flooding, resulting in Highway 323 being closed on occasion, especially in springtime. It was straightened and realigned away from the river in March 2007. Work involved significant tree cutting and blasting. It was opened in the fall of 2009.