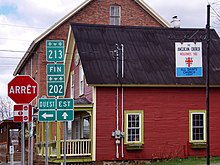 Intersection of Quebec Routes 202 and 213 in downtown Dunham

The entire route is in Brome-Missisquoi RCM.