Advertisement - You can get this game from STEAM
Highway in Quebec

Route 143 is a north/south highway on the south shore of the Saint Lawrence River. Until the mid-1970s when the province decided to renumber all highways other than autoroutes, it was known as Route/Highway 5. Its northern terminus is in Saint-François-du-Lac, at the junction of Route 132, and the southern terminus is in Stanstead at the border with Vermont where the road continues past the Derby Line–Stanstead Border Crossing as U.S. Route 5 through Derby Line to New Haven, Connecticut.

Since Autoroute 55 closely parallels Route 143 for most of its length, much commercial traffic chooses the former. However, it is a very busy route and takes much traffic from the border to the Sherbrooke local area. Route 143 closely follows the Saint-François River between Sherbrooke and Ulverton.

The road is often in notoriously poor condition, since its original cement was laid directly on a gravel road in the mid-1920s. It has been extensively resurfaced to the point the pavement is now more than three feet thick in places. Nonetheless, it heaves extensively each spring thaw. 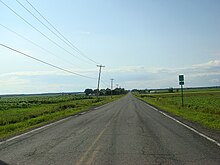