Route 132 is the longest highway in Quebec. It follows the south shore of the Saint Lawrence River from the border with the state of New York in the hamlet of Dundee (connecting with New York State Route 37 (NY 37) via NY 970T, an unsigned reference route, north of Massena[2]), west of Montreal to the Gulf of Saint Lawrence and circles the Gaspé Peninsula. This highway is known as the Navigator's Route. It passes through the Montérégie, Centre-du-Québec, Chaudière-Appalaches, Bas-Saint-Laurent and Gaspésie regions of the province.

Unlike the more direct Autoroute 20, which it shadows from Longueuil to Luceville, Route 132 takes a more scenic route which goes through many historic small towns. Until the connection between Rivière-du-Loup and Le Bic is completed, this highway provides a link between the two sections of Autoroute 20. At Rivière-du-Loup, the Trans-Canada Highway continues south on Autoroute 85 to Edmundston, New Brunswick. This eastern section of the highway, from Rivière-du-Loup towards Gaspé, was the former Route 6, until the early 1970s realignment of route numbers into a grid. 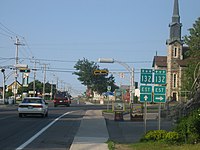 At Sainte-Flavie, the highway splits and one branch turns south following the valley of the Matapédia River to reach the New Brunswick border near Campbellton, joining New Brunswick Route 11, a major highway along that province's eastern coast. The other branch continues east to follow the coast of the Gaspé peninsula and eventually rejoin the other branch at Matapédia. The total length of this loop is over 930 km.

Between Candiac and Varennes, the highway overlaps various current and former Quebec Autoroutes and can be considered a continuous autoroute by itself, as it runs along the Saint Lawrence River through most of this section. Highway 132 joins Autoroute 15 in Candiac at its Exit 42 and overlaps it until Exit 53 (on the other side Exit 75 of Autoroute 20), in Brossard, where Autoroute 15 separates onto Champlain Bridge. There, Highway 132 begins its overlap with Autoroute 20 until Boucherville, where Autoroute 20 splits off onto Autoroute Jean-Lesage. From that point, Highway 132 continues to the east of Boucherville as a four-lane expressway formerly known as Autoroute 430 and downgrades to a two-lane highway in Varennes.