Advertisement - You can get this game from STEAM
Highway in Quebec 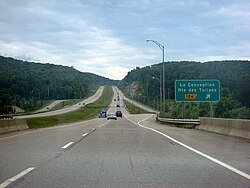 Route 117 is a provincial highway within the Canadian province of Quebec, running between Montreal and the Quebec/Ontario border where it continues as Highway 66 east of Kearns, Ontario. It is an important road as it is the only direct route between southern Quebec and the Abitibi-Témiscamingue region.

This description of Route 117 follows it from the south-east to north-west direction.

117 Fin/End sign at the end of Marcel Laurin Blvd. in Montreal, Quebec.

After Sainte-Agathe-des-Monts, Route 117 continues as a four-lane divided highway winding its way through Laurentides Regional County Municipality until it reaches the town of Labelle. From this point on to the Ontario border, Route 117 is mostly a standard 2-lane highway. In Grand-Remous, Route 117 crosses the Gatineau River and intersects with Route 105 which goes south-west to Maniwaki and Gatineau. Towns along the route in this section include:

Highway 117 at the Dozois Reservoir.

From Grand-Remous, the route heads north, travelling some 220 km through undeveloped wilderness, most of it part of La Vérendrye Wildlife Reserve. While the reserve is popular for a variety of outdoor activities, services along the road are sparse. This section is often considered as one of the most dangerous routes in the province due to numerous fatal accidents, some involving tractor-trailers. During the winter, the route is often extremely slippery, even during dry and clear days. The few communities along this section are:

After the intersection with Route 113 (which continues north to Lebel-sur-Quévillon), Route 117 heads west to Ontario where it becomes Highway 66. The section between Rouyn-Noranda and Arntfield runs concurrent with Route 101. Towns along the route in this section include: