Route 112 is a busy east/west highway on the south shore of the Saint Lawrence River in Quebec, Canada. Its eastern terminus is in Frampton at the junction of Route 275, and the western terminus is in Downtown Montreal (at the corner of Peel Street and Sherbrooke Street), after crossing the Victoria Bridge. The stretch between Vallée-Jonction and Sherbrooke is a very busy highway as it is the main link between the southern regions of Quebec, in particular the Beauce region and the Eastern Townships. Between Sherbrooke and Marieville there is less traffic, since Autoroute 10 is in close proximity to the highway. (Before Autoroute 10 was put in service in the early 1960s, Route 1 (now Route 112) was the main link between Montreal and the Eastern Townships; see paragraph below.) From Marieville to Montreal it is a very busy highway, in most parts a four-lane separated highway, upgraded to freeway standards in certain places. 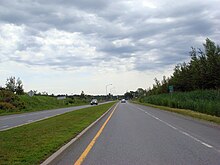 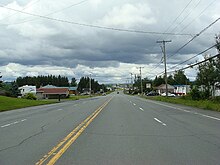