The National Assembly was formerly the lower house of Quebec's legislature and was then called the Legislative Assembly of Quebec. In 1968, the upper house, the Legislative Council, was abolished and the remaining house was renamed. The office of President of the National Assembly is equivalent to speaker in other legislatures. The Coalition Avenir Québec currently has the most seats in the Assembly following the 2018 Quebec general election. 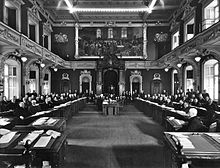 The Legislative Assembly was created in Lower Canada by the Constitutional Act 1791. It was abolished from 1841 to 1867 under the 1840 Act of Union, which merged Upper Canada and Lower Canada into a single colony named the Province of Canada.

In 1978, television cameras were brought in for the first time to televise parliamentary debates. The colour of the walls was changed to suit the needs of television and the salon vert (green hall) became the salon bleu (blue hall). 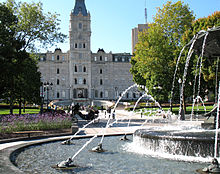 The Fontaine de Tourny east of the Parliament Building

Constructed between 1877 and 1886, the Parliament Building features the Second Empire architectural style[2] that was popular for prestigious buildings both in Europe (especially France where the style originated) and the United States during the latter 19th century.

Although somewhat more sober in appearance and lacking a towering central belfry, Quebec City's Parliament Building bears a definite likeness to the Philadelphia City Hall, another Second Empire edifice in North America which was built during the same period. Even though the building's symmetrical layout with a frontal clock tower in the middle is typical of legislative institutions of British heritage, the architectural style is believed to be unique among parliament buildings found in other Canadian provincial capitals.[citation needed] Its facade presents a pantheon representing significant events and people of the history of Quebec.

In 1936 Maurice Duplessis hung a Crucifix in the National Assembly of Quebec. It hung there for 83 years, until it was removed on 10 July 2019[3]

Additional buildings were added, adjacent to the Parliament Buildings:

General elections are held every four years or less. Since 2014, the legislature has had a fixed four-year term, with elections taking place no later than "the first Monday of October of the fourth calendar year following the year that includes the last day of the previous Legislature." [4] However, the Lieutenant-Governor of Quebec, acting on the advice of the premier, can dissolve the legislature and call an election earlier. Any person holding Canadian citizenship and who has resided in Quebec for at least six months qualifies to be on the electoral list.

Normally, the Lieutenant Governor invites the leader of the political party with the largest number of elected candidates to form the government as premier. (In French, it is rendered as premier ministre. The term "prime minister" is commonly used by the government as a literal translation of the French term. In the other Canadian Provinces, the head of government are referred to in English as "premier". The title is similarly rendered "premier ministre" in French, too. The term literally means "First Minister". When used in the plural, "First Ministers" in Canada refers collectively to the Provincial Premiers and the Prime Minister of Canada).

Quebec's territory is divided into 125 electoral districts (ridings). In each riding, the candidate who receives the most votes is elected and becomes a Member of the National Assembly (MNA). This is known as the first-past-the-post voting system. It tends to produce strong disparities in the number of seats won compared to the popular vote, perhaps best exemplified by the 1966, 1970, 1973, and 1998 elections.

Quebec elections have also tended to be volatile since the 1970s, producing a large turnover in Assembly seats. Consequently, existing political parties often lose more than half their seats with the rise of new or opposition political parties. For instance, the 1970 and 1973 saw the demise of the Union Nationale and rise of the Parti Québécois which managed to take power in 1976. The 1985 and 1994 elections saw the Liberals gain and lose power in landslide elections. The 2018 elections saw the rise of the Coalition Avenir Québec which managed to take power for the first time.

Cabinet ministers are in bold, party leaders are in italic and the president of the National Assembly is marked with a †.

Members of the National Assembly (MNAs) swear two oaths: one to the Canadian monarch as Quebec's head of state, and a second one to the people of Quebec. Previous Parti Québécois premier René Lévesque added the second oath.[5]

Changes during the 42nd Quebec Legislature

One of the members of the National Assembly is elected as the President of the Assembly (a post called Speaker in most other Westminster System assemblies). Any member of the Assembly is eligible to stand for election, other than party leaders and Cabinet ministers. The election is the first order of business for a newly elected Assembly. It is conducted by secret ballot of all members, with successive rounds of voting if needed before one candidate gains a majority of the votes.[8]

The proceedings of the National Assembly are broadcast across Quebec on the cable television network Canal de l'Assemblée nationale.