The Quebec Liberal Party (QLP; French: Parti libéral du Québec, PLQ) is a federalist[6][7][8][9] provincial political party in Quebec, Canada. It has been independent of the federal Liberal Party of Canada since 1955.

The party has traditionally supported a form of Quebec federalism that supports Quebec remaining within the Canadian federation while also supporting reforms that would allow Quebec substantial autonomy. While the party has been described as centrist in the context of Canadian politics,[10] the party believes in a strong role for government in the economy and supports socially liberal policies.[11] The party has a social-democratic faction which was especially prominent during the Quiet Revolution.[12]

The Liberal Party is descended from:

The most notable figure of this period was Louis-Joseph Papineau.

The Liberals were in opposition to the ruling Conservatives for most of the first 20 years after Canadian Confederation, except for 18 months of Liberal minority government in 1878-1879. However, the situation changed in 1885 when the federal Conservative government executed Louis Riel, the leader of the French-speaking Métis people of western Canada. This decision was unpopular in Quebec. Honoré Mercier rode this wave of discontent to power in 1887, but was brought down by a scandal in 1891. He was later cleared of all charges. The Conservatives returned to power until 1897.

Members of the 1897 Marchand government.

The Liberals won the 1897 election, and held power without interruption for the next 39 years; the Conservatives never held power in Québec again. This mirrored the situation in Ottawa, where the arrival of Wilfrid Laurier in the 1896 federal election marked the beginning of Liberal Party of Canada dominance at the federal level. Notable long-serving Premiers of Quebec in this era were Lomer Gouin and Louis-Alexandre Taschereau.

By 1935, however, the Conservatives had an ambitious new leader, Maurice Duplessis. Duplessis merged his party with dissident ex-Liberals who had formed the Action libérale nationale. Duplessis led the new party, the Union Nationale (UN), to power in the 1936 election. The Liberals returned to power in the 1939 election, but lost it again in the 1944 election. They remained in opposition to the Union Nationale until one year after Duplessis's death in 1959.

In 1955, the PLQ severed its affiliation with the Liberal Party of Canada.

Under Jean Lesage, the party won an historic election in 1960, ending sixteen years of rule by the national-conservative Union Nationale. This marked the beginning of the Quiet Revolution, which dramatically changed Québec society. Under the slogans C'est l'temps qu'ça change (it's time for change) in 1960 and maîtres chez nous (masters in our own house) in 1962, the Quebec government undertook several major initiatives, including: 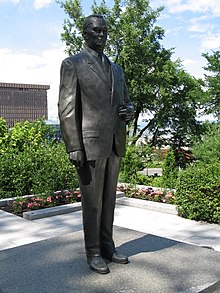 Statue of Jean Lesage in front of the Parliament Building.

In October 1967, former cabinet minister René Lévesque's proposed that the party endorse his plan for sovereignty association. The proposal was rejected and, as a result, some Liberals, including senior Cabinet minister Lévesque, left the Liberals to join the sovereignty movement, participating in the founding of the Parti Québécois (PQ) under Lévesque's leadership.[14]

Relations soured between the Quebec Liberal Party and the federal Liberal Party under Lesage, and worsened further under Robert Bourassa who had a poor relationship with Pierre Trudeau.

First elected in 1970, Robert Bourassa instituted Bill 22 to introduce French language as the official language in Quebec, and pushed Canadian Prime Minister Pierre Trudeau for constitutional concessions. Reelected in 1973, his government was also embarrassed by several scandals. Bourassa resigned from the party's leadership after the loss of the 1976 election to René Lévesque's Parti Québécois.

Bourassa was succeeded as Liberal leader by Claude Ryan, the former director of the respected Montréal newspaper, Le Devoir. Ryan led the successful federalist campaign in the 1980 Quebec referendum on Québec sovereignty, but then lost the 1981 election. He resigned as Liberal leader some time later, paving the way for the return of Robert Bourassa.

When Bourassa returned as Premier in 1985, he successfully persuaded the federal Progressive Conservative government of Brian Mulroney to recognize Quebec as a distinct society, and sought greater powers for Quebec and the other provinces. This resulted in the Meech Lake and Charlottetown constitutional accords. Both of these proposals, however, were not ratified. While a Quebec nationalist, Bourassa remained an opponent of independence for Quebec.

Daniel Johnson, Jr. succeeded Bourassa as Liberal leader and Premier of Québec in 1994, but soon lost the 1994 election to the Parti Québécois under Jacques Parizeau.

In 1993, after the failure of the Charlottetown Accord, many nationalist members of the Liberal party led by Jean Allaire and Mario Dumont, including many from the party's youth wing, left to form the Action démocratique du Québec (ADQ) because the Liberal Party dropped most of its autonomist demands during the negotiation of the Charlottetown Accord. As in 1980, the PLQ campaigned successfully for a "no" vote in the 1995 Quebec referendum on sovereignty.

The contemporary Québec Liberal Party is a broad-based federalist coalition including among its members some supporters of the federal Liberals, New Democratic Party, and Conservatives. In terms of voter support, it has always been able to rely on the great majority of non-francophones in Québec.[15]

The Liberals regained power in the 2003 election. Premier Jean Charest was a federal cabinet minister with the now-defunct Progressive Conservative Party including a stint as Deputy Prime Minister and even serving as its leader for a time. The QLP government proposed a policy of reform of social programs and cuts to government spending and the civil service, and established a controversial health system fee for all taxpayers.

It has also softened language policies. For example, in response to a Supreme Court of Canada decision overruling a loophole-closing stopgap measure enacted by the Bernard Landry government, the Liberals enacted Loi 104 which provides for English-language, unsubsidized private school students to transfer into the subsidized English-language system, thus receiving the right to attend English schools in Québec for their siblings and all descendants, should the student demonstrate a bureaucratically-defined parcours authentique within the English system. Meanwhile, the Office québécois de la langue française (Quebec Board of the French Language) under the Liberal provincial government has also opted for a demand-side strategy for the enforcement of language laws, using a number of publicity campaigns, including stickers which merchants may voluntarily affix on their shop windows stating that French service may be obtained within, allowing for consumers to "choose" stores which will serve them in French.

The Liberal party suffered a major setback in the 2007 election, which saw them reduced to a minority government, having lost francophone support to the surging ADQ.[16] However, the party regained a majority in the 2008 election, which saw the collapse of ADQ support and the return of the Parti Québécois as the main opposition party. Election turnout was the lowest in Québec since the Quiet Revolution.

Since its most recent election, the Liberal government has faced a number of scandals, including historic losses at the Caisse de dépôt et placement du Québec, the attribution of highly sought-after subsidized daycare spaces to Liberal Party donors, as well as allegations of systemic construction industry corruption which arose notably during the 2009 Montréal municipal election. After public pressure, the Liberal government eventually called for a public commission of inquiry. Jean Charest's personal approval ratings have at times been lower than those of other premiers.[17]

In 2012 the Liberal government announced it was going to raise university tuition from $2,168 to $3,793 in increments between 2012 and 2017. This move proved controversial, leading to a significant portion of Quebec post-secondary students striking against the measures. In response to the discord the Quebec Liberal government introduced controversial emergency legislation via Bill 78 that restricted student protest activities, attacking students' right to strike and to demonstrate peacefully, and dealt with the administrative issues resulting from so many students missing classes.

After almost a decade in power, the Liberal government of Jean Charest was defeated in the 2012 provincial election by the Parti Québécois led by Pauline Marois. Charest was also personally defeated in his constituency and resigned as party leader.

They came back into power during the 2014 election under Philippe Couillard.[18] In the 2018 election, they become the official opposition.[19]

The Quebec Liberal Party has faced various opposing parties in its history. Its main opposition from the time of Confederation (1867) to the 1930s was the Parti conservateur du Québec. That party's successor, the Union Nationale, was the main opposition to the Liberals until the 1970s. Since then the Liberals have alternated in power with the Parti Québécois, a Quebec sovereigntist, self-described social-democratic party and very recent with the Coalition Avenir Québec, a Quebec autonomist and conservative party.