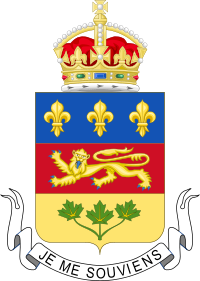 The Court of Appeal of Quebec (sometimes referred to as Quebec Court of Appeal or QCA) (in French: la Cour d'appel du Québec) is the highest judicial court in Quebec, Canada. It hears cases in Quebec City and Montreal.

The Court was created on May 30, 1849, as the Court of Queen's Bench (Cour du Banc de la Reine in French) - or Court of King's Bench (Cour du Banc du Roi in French) depending on the gender of the current Monarch serving as Canada's head of state. The Court's judges had jurisdiction to try criminal cases until 1920, when it was transferred to the Superior Court. In 1974, it was officially renamed the Quebec Court of Appeal.[1]

The ability of the Supreme Court of Canada, which has six of its nine justices from common law provinces and only three from the civil law province of Quebec, to overrule the Court of Appeal of Quebec has occasionally been raised as a political issue by Quebec nationalists[citation needed], who worry that it erodes Quebec's distinctive legal culture.

As a "Superior Court" under section 96 of the Constitution Act, 1867, Court of Appeal judges are appointed by the Governor-General of Canada on the advice of the Prime Minister of Canada (in practical terms the advice is always followed). Appointees must be members of the Quebec Bar, but need not have had previous experience as a judge. However, appointees almost always have some experience as a judge, usually on the Superior Court of Quebec. The quorum of the Court of Appeal of Quebec for appeals on the merits is generally three judges, but the Court has also sat five judges in exceptional circumstances, and in one recent extremely exceptional case, the Court sat seven judges.[4] However, for Applications seeking leave to appeal and most other applications in the course of the proceeding, quorum is composed of only one judge of the Court of Appeal.[5]