Autoroute 85 is a Quebec Autoroute and the route of the Trans-Canada Highway in the province's Bas-Saint-Laurent region, also known as the Autoroute Claude-Béchard. It is currently under construction with committed Federal and Provincial funding for its completion, with an estimated completion date of 2025.[3] Once this upgrade is completed, it will close the last gap in the nearly continuous freeway section of the Trans-Canada between Arnprior, Ontario, and Sutherlands River, Nova Scotia, and for an even longer interprovincial freeway route between Windsor, Ontario and Halifax, Nova Scotia. Running between Rivière-du-Loup (at a junction with Autoroute 20) and a junction with New Brunswick Route 2 at the Quebec-New Brunswick border, the A-85 when complete will be the only controlled access highway link between the Maritime Provinces and the rest of the country. The A-85 is projected to be approximately 100 km (60 mi) long when construction is complete and is intended to replace Route 185, which has been called one of the deadliest highways in Canada.[4]

Currently there are two completed sections of the A-85. Constructed in 1970, the first section runs from Saint-Antonin (km 87) to a junction with the A-20 at Notre-Dame-du-Portage (km 100). Originally signed as Route 185 when built, it was designed as A-85 in 2005 following extensive rehabilitation. The second, newer section extends from the New Brunswick border (km 0) to Saint-Louis-du-Ha! Ha! (km 48). Construction began in 2002 in the vicinity of Témiscouata-sur-le-Lac and continued to 2016.

The A-85 begins at the Quebec-New Brunswick border as the continuation of New Brunswick Route 2 and the Trans-Canada Highway. In 2010, the Quebec government announced that the A-85 would be named for Claude Béchard, a longtime Member of the National Assembly from Bas-Saint-Laurent.[5]

From the New Brunswick border, the A-85 briefly parallels the main runway of the Edmundston Airport, which straddles the interprovincial border. The A-85 travels in a northwesterly direction, following the course of the Madawaska River. The autoroute passes Dégelis to the west with exits at km 12, km 14, and km 15. Briefly skirting the south shore of Lake Témiscouata, the A-85 passes through Témiscouata-sur-le-Lac, with exits at km 29, km 37, and km 40 (which provides access to Parc nationale Lac-Témiscouata). At Saint-Louis-du-Ha! Ha! (km 48), the controlled-access highway ends and the route resumes its designation as Route 185.

The second section of the A-85 begins in Saint-Antonin with exits at km 89, km 90, and km 93 as it traverses the Saint Lawrence Lowlands. Exit 93 provides access to Route 191 which bypasses Rivière-du-Loup to the south and provides the most direct route for motorists bound for Rimouski, Mont-Joli, and Gaspésie via eastbound A-20. After one last exit (km 97), the A-85 merges with westbound A-20 at the Saint Lawrence River. Westbound A-20 assumes the Trans-Canada Highway designation, continuing on to Québec City and Montréal, then to Windsor via the A-20 and Ontario Highway 401, or Ottawa via the A-40 and Ontario Highway 417. 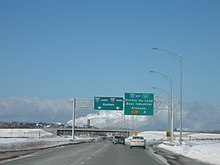 The entire route is located in Bas-Saint-Laurent.