Part of A-720 runs underground (below grade) through Downtown Montreal. This section begins from the west at Rue de la Montagne / Rue Atwater (exit 4) and remains underground almost all the way to its eastern end, except for a short section between Rue Saint-Urbain and Rue Hôtel-de-Ville . The tunnelled section west of this gap is known as the Ville-Marie Tunnel, and the section east of it is known as Viger Tunnel. However, locals regard both tunnels as one, and the term Ville-Marie Tunnel is often used to refer to both tunnels.

The Turcot Interchange, which is the western terminus of A-720, is currently undergoing a reconstruction project. Once completed, the A-720 will be downgraded from an autoroute to a national highway and renumbered Route 136.[3] 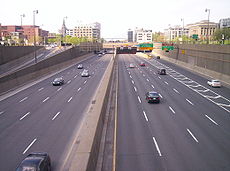 The Ville-Marie Expressway near Old Montreal

It was originally envisioned that Autoroute 20 would extend from the Turcot Interchange, along the route of the 720, to the Louis Hippolyte Lafontaine Bridge-Tunnel. Indeed, when the first section of the expressway was constructed and opened in the early 1970s, many Montrealers, anticipating that it would eventually replace the Metropolitan Expressway as the primary connector route to the Lafontaine Tunnel, and onward to Quebec City, dubbed the then-unnamed roadway the "Downtown Trans-Canada Highway". The provincial transport ministry (Le ministère des Transports du Québec, or MTQ) had planned to extend the Viger Tunnel east to Autoroute 25 at its Souligny Avenue interchange. The right-of-way has existed since the original layout of the A-720, and buildings along the extension were demolished at that time, even though the 720 was not completed due to cost constraints. The government of Montreal instead converted the portion of Rue Notre Dame east of the Jacques Cartier Bridge into a six-lane urban boulevard, rather than continue a sunken limited-access expressway. The final project was approved, and work began on Souligny Avenue to double the span of the travel lanes. In late July 2009, an A-720 westbound shield that was installed on this stretch. In 2007, working crews for Transports Québec discovered major cracks in a support pillar and closed several lanes of the expressway. Transports Quebec announced on August 10, 2007, major repair projects for a large section of the Expressway west of the Ville-Marie tunnel.[4] In addition, the full reconstruction of the Turcot Interchange in the next several years will also affect portions of the 720. As of 2012, the 720 will be renamed Route 136 at the end of the reconstruction, which is due to be late 2019.[3]

On July 31, 2011, part of the roof of the Ville-Marie Tunnel collapsed, sending large chunks of concrete to the road below. This incident occurred at a time with little traffic and no vehicles were damaged. Several construction workers were on site at the time and were unharmed.[5] The tunnel had to be closed for repair of the roof and several other parts of the tunnel. Transport Minister Sam Hamad announced on Friday, August 5 that the tunnel would re-open the following day.

The entire route is located in Montréal.