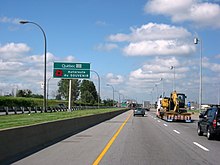 The autoroute system is a network of freeways within the province of Quebec, Canada, operating under the same principle of controlled access as the Interstate Highway System in the United States and the 400-series highways in neighbouring Ontario. The Autoroutes are the backbone of Quebec's highway system, spanning almost 2,400 km (1,491 mi). The speed limit on the Autoroutes is generally 100 km/h (62 mph) in rural areas and 70–90 km/h (43–56 mph) in urban areas; most roads are made of asphalt concrete.

The word autoroute is a portmanteau of auto and route, equivalent to "motorway" in English, and has become the Quebec French equivalent of "expressway". In the 1950s, when the first Autoroutes were being planned, the design documents called them autostrades, from the Italian word autostrada.[3] 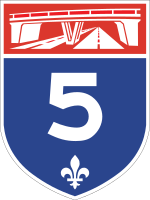 Autoroutes are identified by blue-and-red shields, similar to the American Interstate system. The red header of the shield contains a white image representing a highway overpass, and the blue lower portion of the shield contains the Autoroute's number in white, along with a fleur-de-lis, which is a provincial symbol of Quebec.

Most Autoroute and road traffic signs in the province are in French, though English is also used on federally-financed or -owned routes, such as the Bonaventure Expressway in Montreal. To surmount the language barrier, however, most signs in Quebec use pictograms and text is avoided in most cases, with the exceptions usually only being the names of control cities. Other exceptions that are posted in both languages is the illegal use of radar detectors when entering the province that reads "DÉTECTEURS DE RADAR INTERDITS/RADAR DETECTORS PROHIBITED", as well as areas where roads can be slippery due to melting ice and snow, marked "DEGEL/THAW".

Drivers along eastbound Autoroute 30 approach the exit for Autoroute 15.

It was the Quebec Liberal government of the 1960s that saw the construction of further Autoroutes, with a grid numbering system and the introduction of the blue and red shield. The sign is inspired by the American Interstate sign. This was especially needed in light of the fact that many visitors would be flocking to Montreal by car for Expo 67. Montreal's Autoroute Décarie (A-15) and the Louis-Hippolyte Lafontaine Bridge–Tunnel were constructed for that very reason. The Autoroute des Cantons-de-l'Est (Eastern Townships Autoroute - A-10) opened in 1964, and its continuation, A-55 between Magog and Rock Island, opened in 1967, connecting with Interstate 91. What are now the A-20 (part of the Trans-Canada Highway) and the A-15 to New York (connecting with Interstate 87), originally built in the 1940s, were upgraded to expressway standards. The A-20 also connects with Highway 401 in Ontario. A-40 was extended out to Berthierville, and later to Trois-Rivières in the 1970s. Others include Autoroutes 25, 30 (southern beltway), 31, 35 (eventually connecting to Interstate 89), Autoroute Laurentienne (73), and 640 (an unfinished proposed northern beltway).

The 1970s also saw the completion of the Pierre Laporte Bridge in Quebec City, connecting the south shore of the Saint Lawrence River to the north. In addition to this, the A-73 was extended to Beauce, the A-20 was extended to Rivière-du-Loup, and the Chomedey Autoroute (A-13), the A-19 and the A-440 were constructed in Laval. Autoroutes were built (two sections of A-440, and A-740) and a few more planned in the Quebec City region, creating a dense web, which led to significant sprawl. In 1976, the Parti Québécois came to power, whose platform mandated an expansion of public transportation over the construction of more Autoroutes. Existing Autoroutes were extended (e.g., the A-40 was extended from Trois-Rivières to Quebec City) but no new Autoroutes were built.

In the 2000s, there were several high-profile failures and collapses around some Autoroutes, due to aging and crumbling infrastructure, including the Boulevard du Souvenir overpass collapse, De la Concorde overpass collapse, and most recently the Ville-Marie tunnel collapse. An online poll by Léger Marketing conducted shortly after the Viger tunnel collapse found that 88 percent of Montrealers are "worried" about the state of roads, bridges and tunnels in the city, with more than half of respondents saying they are downright "scared" to drive under an overpass (58 percent), on a bridge (54 per cent), or through a tunnel (53 per cent). McGill University's Saeed Mirza stated that ill-advised design choices and poor-quality concrete were used in the construction rush ahead of Expo '67 and the 1976 Olympics. In particular, the concrete used was permeable with lack of proper drainage, and these allowed chlorides from de-icing salts to corrode the steel reinforcements.[4]