The Québec Capitales (French: Les Capitales de Québec) are a professional baseball team based in Quebec City, Quebec, Canada. The Capitales are a member of the Frontier League since the 2020 season after a merger between the Can-Am League and the Frontier League in October 2019. Since the 1999 season to the present, the Capitales have played their home games at Stade Canac.

The team was established in 1999 as a member of the independent Northern League. Their mascot is Capi the Lion.

History of baseball in Quebec City

In 1999, the Capitales joined the Northern League (East Division) as an expansion team. The Capitales are one of two Canadian teams in the league, the other being the Trois-Rivieres Aigles. As of 2019, the Capitales are the most successful team in the Can-Am League on and off the field, having won the League championship more times (7) than any other team and being among the tops in attendance every season averaging over 3,000 fans per game since 2001. Since 2000, the Capitales have made the playoffs 16 times.

In 2006, the Capitales won their first championship in team history. Although the team had the second-worst record in team history they still qualified for last postseason spot with a 44-44 record. They defeated the top seed North Shore Spirit in dramatic come from behind fashion winning the last two games to win the series 3 games to 2. In the championship series, the Capitales took a 2 games to none advantage before the Brockton Rox came back to even the series. In the final and decisive game, the Capitales defeated the Rox on their home field by coming from behind and won by a score of 5-4 to win the Can-Am League Championship 3 games to 2.

Jonathan de Marte on the mound during a Quebec Capitales game, August 2019

In 2020, the Capitales moved to the Frontier League following the merger of the Can-Am League with the Frontier League. However, due to the COVID-19 pandemic and extended closure of the Canada–United States border, the league announced that the Capitales (along with the Trois-Rivières Aigles) would be unable for the 2020 season (which was later cancelled).[1] The club later announced they intended to organize a separate league in Québec for the summer as an alternative, but these plans were eventually scrapped by both clubs. 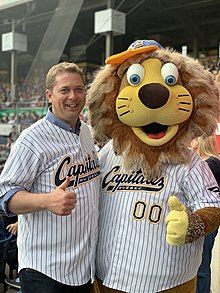 The official colours of the Québec Capitales are navy blue and gold. The primary logo consists of a white baseball diamond with navy blue pinstripes. The "Capitales" wordmark is superimposed over the diamond in navy blue outlined in gold. The wordmark is underlined by a navy blue ribbon with the word "Québec" centred on it in white, with the French word "de" centred in between. A navy blue fleur-de-lis is centred above the wordmark, with a stylized depiction of home plate centred below.

The Québec Capitales uniforms are traditional in design. The caps are navy blue throughout with the scripted "Q" cap logo centred on the front in gold with a white centre incorporating a navy blue fleur-de-lis and red baseball threading. The home jerseys are white with navy blue pinstripes, with the "Capitales" cursive script wordmark centred across in navy blue with gold outline. The alternate jersey is navy blue with gold piping with the cap logo centred on the left-side chest.

Over the years, the Capitales have had several rivalries. One significant rivalry is against the New Jersey Jackals. They have both won four league championships in their histories. The Capitales defeated the Jackals three times in the championship series, 2011, 2012, and 2013.

The Capitales also have a rivalry with the Trois-Rivières Aigles. This is because both teams are geographically in the same province of Quebec.

Another rivalry was against the Ottawa Voyageurs. Even though the Voyageurs played in the Can-Am League for only two seasons, it was still a significant rivalry due to both teams playing in the same country and the closeness of both provinces of Ontario and Quebec. When the Ottawa Champions were formed in 2015, this sparked another rivalry for the Capitales.

Current uniform colours: White with navy pinstripes for home games and grey for away games. The home with the word "Capitales" across the front and number on the back. Navy blue hats with the letter "Q" with fleur-de-lis superimposed over a baseball. Alternate uniforms are navy blue with the "Q" cap logo centred on the left chest.
Current logo design: The word "Capitales" in script in navy blue with gold outline superimposed over a white baseball diamond with navy blue pinstripes.
Current mascot: Capi (1999-present).
Current Broadcasters: Radio: François Paquet for home games and select road games
Current Radio Station: CHYZ-FM 94.3