Advertisement - You can get this game from STEAM
This article is about the city in Chile. For the city in Costa Rica, see Puntarenas. For other uses, see Punta Arenas (disambiguation).
Place in Magallanes y Antártica Chilena, Chile 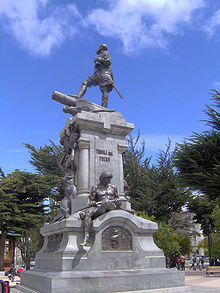 Punta Arenas (Spanish pronunciation: [ˈpunta aˈɾenas]; historically Sandy Point in English) is the capital city of Chile's southernmost region, Magallanes and Antartica Chilena. The city was officially renamed as Magallanes in 1927, but in 1938 it was changed back to "Punta Arenas". It is the largest city south of the 46th parallel south, and at the same time the most populous southernmost city in Chile and in the Americas, and due to its location, the coldest coastal city with more than 100,000 inhabitants in Latin America. It is also one of the most populous sites so far south in the world.

As of 1977 Punta Arenas has been one of only two free ports in Chile, the other one being Iquique, in the country's far north.[4] (Punta Arenas itself is not a "free port": outside the city there is a "zona franca" where certain products can be imported into the country under a reduced-tax regimen.)

Located on the Brunswick Peninsula north of the Strait of Magellan, Punta Arenas was originally established by the Chilean government in 1848 as a tiny penal colony to assert sovereignty over the Strait. During the remainder of the 1800s, Punta Arenas grew in size and importance due to the increasing maritime traffic and trade travelling to the west coasts of South and North America. This period of growth also resulted from the waves of European immigrants, mainly from Croatia and Russia attracted to the gold rush and sheep farming boom in the 1880s and early 1900s. The largest sheep company, controlling 10,000 square kilometres in Chile and Argentina, was based in Punta Arenas, and its owners lived there.

Since its founding Chile has used Punta Arenas as a base to defend its sovereignty claims in the southernmost part of South America. This led, among other things, to the Strait of Magellan being recognized as Chilean territory in the Boundary treaty of 1881 between Chile and Argentina. The geopolitical importance of Punta Arenas has remained high in the 20th and 21st centuries because of its logistic importance in accessing the Antarctic Peninsula.

Since 2017, the city and its region have their own time zone: they use summer time during the whole year (UTC−3).

The name Sandy Point derives from the voyage of John Narborough in 1669-1671. He wrote in his account:

Sand-Point [sic] is a mean low Point, lies out more than the other Points of the shore, and a few trees grow on it.[5]

It was not until 1843 that the government tried to establish a fort and settlement at Fuerte Bulnes. The name Punta Arenas was derived from the Spanish term Punta Arenosa, a literal translation of the English name "Sandy Point". The city has also been known as Magallanes. Today that term is normally used to describe the administrative region which includes the city.

Punta Arenas has been nicknamed "the city of the red roofs" for the red-painted metal roofs that characterized the city for many years. Since about 1970, the availability of other colours in protective finishes has resulted in greater variety in the characteristic metal roofs.

Located on the Brunswick Peninsula, Punta Arenas is among the largest cities in Patagonia. In 2012, it had a population of 127,454.[6] It is roughly 1,419 kilometres (882 mi) from the coast of Antarctica and 635 kilometres (395 mi) from Ushuaia the capital of the Argentine province of Tierra Del Fuego.

The Magallanes region is considered part of Chilean Patagonia. Magallanes is Spanish for Magellan, and was named after Ferdinand Magellan, the Portuguese explorer sailing for Spain. While circumnavigating the earth for Spain, he passed close to the present site of Punta Arenas in 1520. Early English navigational documents referred to this site as "Sandy Point".

The city proper is located on the northeastern shore of Brunswick Peninsula. Except for the eastern shore, containing the settlements of Guairabo, Rio Amarillo and Punta San Juan, the peninsula is largely uninhabited. The municipality of Punta Arenas includes all of Brunswick Peninsula, as well as all islands west of the Isla Grande de Tierra del Fuego and north of Cockburn and Magdalena channels.

The largest of those are: 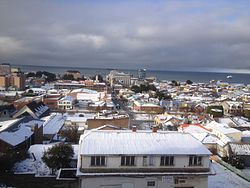 Due to its far southern latitude, Punta Arenas has a subpolar oceanic climate (Köppen climate classification Cfc) bordering on a tundra climate. The seasonal temperature in Punta Arenas is greatly moderated by its proximity to the ocean, with average lows in July near −1 °C (30 °F) and highs in January of 14 °C (57 °F). It is known for stable constant temperatures, which vary only slightly with the seasons. Rainfall is highest in April and May, and the snowy season runs all through the Chilean winter (June until September). As in most of Patagonia, average annual precipitation is quite low, only 380 mm (15 in) because of a rain shadow created by the Andes. The average temperature does not go below 1 °C (34 °F).[7] The city is also known for its strong winds (up to 130 km/h [81 mph]), which are strongest during the summer. City officials have put up ropes between buildings in the downtown area to assist pedestrians with managing the strong downdrafts.[citation needed]

Since 1986, Punta Arenas has been the first significantly populated city in the world to be affected directly by the thinning ozone layer. Its residents are considered to be exposed to potentially damaging levels of ultraviolet radiation.[8][9][needs update] 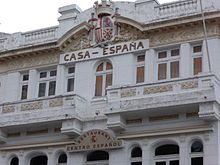 Casa España, established in 1917 by the Spanish Society of Socorros Mutuos. It was formed between 1936 and 1938. Plaza de Armas (Muñoz Gamero Park). 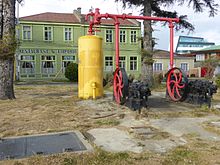 Christopher Columbus Avenue, the location of the Old Machine House was built in 1890 by Croatians.

Two early Spanish settlements were attempted along this coast (on the Straits of Magellan). The first was founded in 1584 and was called Nombre de Jesús. It failed due to the harsh weather and difficulty in the settlers' obtaining food and water, and the enormous distances from other Spanish ports. A second colony, Cuidad del Rey don Felipe, was attempted about 80 kilometres south of Punta Arenas. This became known later as Puerto del Hambre, which translates to Port Famine. Spain had established these settlements in an attempt to protect its shipping and prevent piracy by English pirates, by controlling the Straits of Magellan. An English pirate captain, Thomas Cavendish, rescued the last surviving member of Puerto del Hambre in 1587.[14][15]

In 1843 the Chilean government sent an expedition to build a fort and establish a permanent settlement on the shores of the Strait of Magellan. It built and commissioned a schooner called Goleta Ancud. Under the command of John Williams Wilson, Chilean Navy, it transported a crew of 21 people (captain, eighteen crew, and two women), plus cargo, to accomplish the mandate. The founding act of the settlement took place on 21 September 1843.[16]

The fort was well-positioned on a small rocky peninsula, but the location could not support a proper civilian settlement. With this in mind the Military Governor, José de los Santos Mardones, decided in 1848 to move the settlement to its current location, along the Las Minas river, and renamed it Punta Arenas.

In the mid-19th century, Chile used Punta Arenas as a penal colony and a disciplinary posting for military personnel with "problematic" behaviour. It also settled immigrants there. In December 1851, a prisoners' mutiny led by Lieutenant Cambiaso, resulted in the murder of Governor Muñoz Gamero and the priest, and the destruction of the church and the hospital.[17] The mutiny was put down by Commander Stewart of HMS Virago assisted by two Chilean ships: Indefatigable and Meteoro.[18][19]

In 1867, President José Joaquín Pérez issued a decree offering land grants in an effort to get Chileans or foreigners to settle around Punta Arenas. The first British immigrants arrived in 1867, and their number increased as sheep farming grew in the Chilean Magallanes. The greatest immigration continued to be by the British until 1906, when Croatians surpassed them in numbers.[20]

An 1877 mutiny, known as El motín de los artilleros (Mutiny of the Artillerymen), led to the destruction of a large part of the town and the murder of many civilians not directly associated with the prison. In time the city was restored. The growth of the sheep farming industry and the discovery of gold, as well as increasing trade via sailing ships, attracted many new settlers, and the town began to prosper.

Between about 1890 and 1940, the Magallanes region became an important sheep-raising region, with one company (Sociedad Explotadora de Tierra del Fuego) controlling over 11,000 square kilometres (4,200 sq mi). In 1910, Sociedad Explotadora merged with Sociedad Ganader, resulting in a company possessing 3 million hectares in southern Chile and Argentina, with over 2 million head of sheep.[20]:120–125 The headquarters of this company and the residences of the owners were in Punta Arenas. The Sarah Braun Museum is now established at the former Braun-Menéndez mansion, in the centre of Punta Arenas.

The Punta Arenas harbour, although exposed to storms, was considered one of the most important in Chile before the construction of the Panama Canal. It was used as a coaling station by the steamships transiting between the Atlantic and Pacific oceans. Today it is mostly used by tourism cruises and scientific expeditions.

The city is often a base for Antarctic expeditions; Ushuaia (Argentina) and Christchurch (New Zealand) are also common starting points.[21] 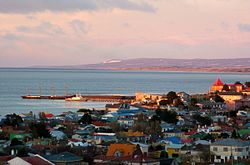 The County of Peebles and Cavenga are used as a breakwater for the harbour at Punta Arenas.

The city was populated by many colonists from Spain and Croatia in the mid-nineteenth century, and many of their descendants remain. Other national ethnic groups represented are German, English, Italian, Swiss and Irish.

Croatian immigration to Punta Arenas was a crucial development in the region of Magallanes and the city in particular. Currently, this influence is still reflected in the names of shops, streets and many buildings. According to some references, some 50% of the population of Punta Arenas are ethnic Croats.[22] 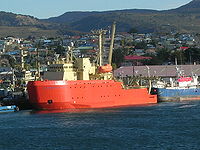 By 2006 the economy of Punta Arenas and the region had diversified. Chile's principal oil reserves are close by, along with some low-grade coal.[citation needed]

Agricultural production, including sheep and cattle, continues to play a significant role.

Tourism has contributed to the city's economy and steady growth. Tourist destinations include the Cathedral and other notable churches, the city cemetery, and the statute of Magellan. Some cruise ships to Antarctica depart from Punta Arenas's port, which also serves as a hub for many cruise lines that travel along the channels and fjords of the region.[citation needed]

A scheduled ferry service connects Punta Arenas with the main island of Tierra del Fuego, and a less frequent ferry runs to the Chilean town of Puerto Williams.[citation needed]

There is a German school, Deutsche Schule Punta Arenas.[23] 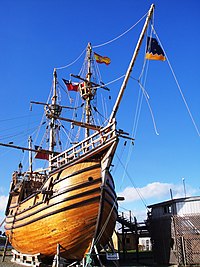 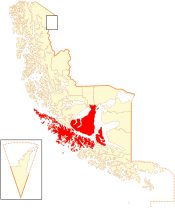 Map of the Punta Arenas commune in Magallanes Region

As a "comuna" (commune) Punta Arenas is a third-level administrative division of Chile administered by a municipal council, headed by an alcalde who is directly elected every four years. The 2016–2020 alcalde is Claudio Radonich (National Renewal).[1][2]

Within the electoral divisions of Chile, Punta Arenas is represented in the Chamber of Deputies by Carolina Goic (PDC) and Miodrag Marinovic (Ind.) as part of the 60th electoral district, which includes the entire Magallanes and Antartica Chilena Region. The commune is represented in the Senate by Carlos Bianchi Chelech (Ind.) and Pedro Muñoz Aburto (PS) as part of the 19th senatorial constituency (Magallanes Region).

The city has sea, land, and air connections.

Carlos Ibáñez del Campo airport is located 20 kilometers from the city centre. Rental car services, duty-free shops and custom office services are available in the building (there is no duty-free shop in the terminal, despite the representations of tourist literature). Airlines serving the airport include LATAM Chile and Sky Airline, as well as charter flights. The civilian airport and the military airport make up the larger complex.

By road, a connection to other regions of Chile requires passing through Argentine territory. [7]

By sea, several cruises and ferries can take visitors to the city, although the costs are higher because they include stops at tourist sites along the route.