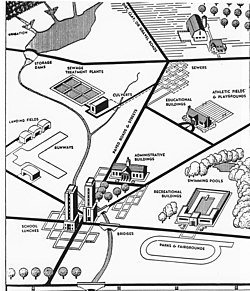 A US government poster from 1940, summarizing the Works Progress Administration's achievements.

Public works has been encouraged since antiquity. For example, the Roman emperor Nero encouraged the construction of various infrastructure projects during widespread deflation.[1]

Furthermore, the term public works has recently been expanded to include digital public infrastructure projects. For example, in the United States, the first nationwide digital public works project is an effort to create an open source software platform for e-voting (created and managed by the Open Source Digital Voting Foundation).[2]

Reflecting increased concern with sustainability, urban ecology and quality of life, efforts to move towards sustainable municipal infrastructure are common in developed nations, especially in the European Union and Canada (where the FCM InfraGuide provides an officially mandated best practice exchange to move municipalities in that direction).

A public employment programme or public works programme is the provision of employment by the creation of predominantly public goods at a prescribed wage for those unable to find alternative employment. This functions as a form of social safety net. Public works programmes are activities which entail the payment of a wage (in cash or in kind) by the state, or by an Agent (or cash-for work/CFW). One particular form of public works, that of offering a short-term period of employment, has come to dominate practice, particularly in regions such as Sub-Saharan Africa. Applied in the short term, this is appropriate as a response to transient shocks and acute labour market crises.[3]

Investing in public works projects in order to stimulate the general economy has been a popular policy measure since the economic crisis of the 1930s. Spearheaded by U.S. Secretary of Labor Frances Perkins, the first female Cabinet member in the United States, the New Deal resulted in the creation of programs such as the Civilian Conservation Corps, Public Works Administration, and the Works Progress Administration, among others, all of which created public goods through labor and infrastructure investments.[4]

More recent examples are the 2008–2009 Chinese economic stimulus program, the 2008 European Union stimulus plan, and the American Recovery and Reinvestment Act of 2009.

While it is argued that capital investment in public works can be used to reduce unemployment, opponents of internal improvement programs argue that such projects should be undertaken by the private sector, not the public sector, because public works projects are often inefficient and costly to taxpayers. Further, some argue that public works, when used excessively by a government, are characteristic of socialism and other totalitarian or collectivist forms of government because of their 'tax and spend' policies and excessive bureaucracy. However, in the private sector, entrepreneurs bear their own losses and so private-sector firms are generally unwilling to undertake projects that could result in losses or would not develop a revenue stream. Governments will invest in public works because of the overall benefit to society when there is a lack of private sector benefit (a project that does generate revenue) or the risk is too great for a private company to accept on its own.

According to research conducted at the Aalborg University, 86% of public works projects end up with cost overruns. Some unexpected findings of the research were the following:

Generally, contracts awarded by public tenders include a provision for unexpected expenses (cost overruns), which typically amount to 10% of the value of the contract. This money is spent during the course of the project only if the construction managers judge that it is necessary, and the expenditure must typically be justified in writing.