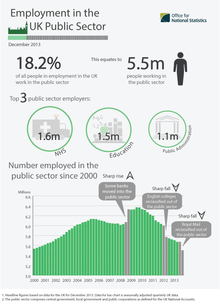 The public sector (also called the state sector) is the part of the economy composed of both public services and public enterprises.

Public sectors include public goods and governmental services such as the military, law enforcement, infrastructure (public roads, bridges, tunnels, water supply, sewers, electrical grids, telecommunications, etc.), public transit, public education, along with health care and those working for the government itself, such as elected officials. The public sector might provide services that a non-payer cannot be excluded from (such as street lighting), services which benefit all of society rather than just the individual who uses the service.[1] Public enterprises, or state-owned enterprises, are self-financing commercial enterprises that are under public ownership which provide various private goods and services for sale and usually operate on a commercial basis.

The organization of the public sector can take several forms, including:

A borderline form is as follows:

Libertarian and Austrian economists have criticized the idea of public sector provision of goods and services as inherently inefficient.[3].

"Any reduction of the public sector, any shift of activities from the public to the private sphere, is a net moral and economic gain."-Murray Rothbard, The Fallacy of the Public Sector[4]

Libertarians and anarcho-capitalists have also argued that the system by which the public sector is funded, namely taxation, is itself coercive and unjust.[5] However, even notable small-government proponents have pushed back on this point of view, citing the ultimate necessity of a public sector for provision of certain services, such as national defense, public works and utilities, and pollution controls.[6].