The People's Republic of China (PRC) claims the island of Taiwan and its surrounding islets, including Penghu, as "Taiwan Province", though Taiwan has not been under control of a government that ruled from mainland China since 1949, when the Republic of China (ROC) lost the mainland to the Communist Party of China, which established the PRC. (Kinmen and the Matsu Islands are claimed by the PRC as part of its Fujian Province. The Pratas Islands and Taiping Island are claimed by the PRC as part of Guangdong and Hainan provinces respectively.) The territory is controlled by the Republic of China (ROC, commonly called "Taiwan") though the provinces were streamlined in 1998 and the provincial governments were de facto dissolved in 2019.

A municipality (simplified Chinese: 直辖市; traditional Chinese: 直轄市; pinyin: zhíxiáshì; lit.: 'direct-administrated city') or municipality directly under the administration of the central government is a higher level of city which is directly under the Chinese government, with status equal to that of the provinces. In practice, their political status is higher than that of common provinces.

A special administrative region (SAR) (simplified Chinese: 特别行政区; traditional Chinese: 特別行政區; pinyin: tèbié xíngzhèngqū) is a highly autonomous and self-governing sub national subject of the People's Republic of China that is directly under the Central People's Government. Each SAR has a chief executive as head of the region and head of government. The region's government is not fully independent, as foreign policy and military defence are the responsibility of the central government, according to the basic laws.

See also: History of the administrative divisions of China

Further information: the Chinese Wikipedia article on the administrative divisions of the Sui dynasty 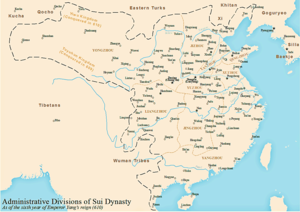 By the time unity was finally reestablished by the Sui dynasty, the provinces had been divided and redivided so many times by different governments that they were almost the same size as commanderies, rendering the two-tier system superfluous. As such, the Sui merged the two together. In English, this merged level is translated as "prefectures". In Chinese, the name changed between zhou and jun several times before being finally settled on zhou. Based on the apocryphal Nine Province system, the Sui restored nine zhou.[9] 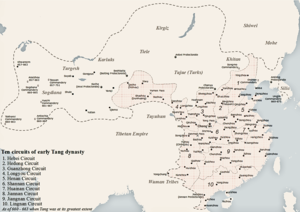 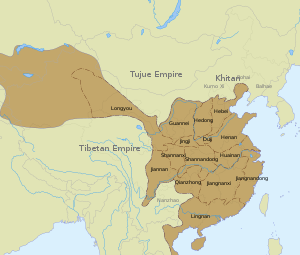 Emperor Taizong (r. 626–649) set up 10 "circuits" (道; dào) in 627 as inspection areas for imperial commissioners monitoring the operation of prefectures, rather than a new primary level of administration. In 639, there were 10 circuits, 43 commanderies (都督府; dūdū fǔ), and 358 prefectures (州 and later 府; fǔ).[10] In 733, Emperor Xuanzong expanded the number of circuits to 15 by establishing separate circuits for the areas around Chang'an and Luoyang, and by splitting the large Shannan and Jiangnan circuits into 2 and 3 new circuits respectively. He also established a system of permanent inspecting commissioners, though without executive powers.[11] 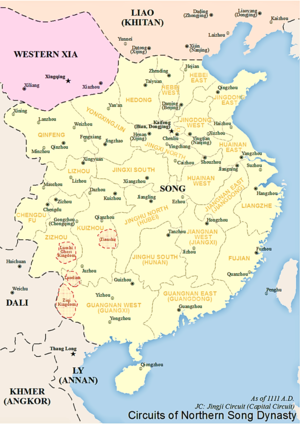 The Song government abolished the previous commissioners and renamed their circuits (路; lù, literally meaning "roads", but however is still usually translated into English as "circuits"). They also added a number of "army" prefectures (軍; jūn). Similarly, Liao and Jurchen Jin dynasties also established circuits as the first-level administrative division. 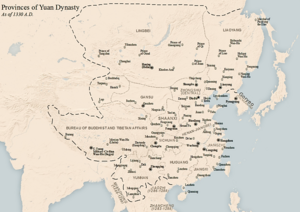 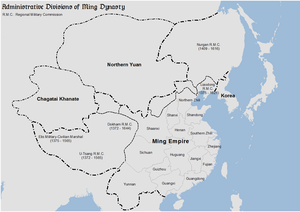 The Ming Dynasty (1368–1644) kept the province system set up by the Yuan Dynasty, however, it divided the original 10 provinces into 16 provinces, later 2 capital metropolitan areas and 13 provinces (兩京十三省) within China proper and 5 additional military ruled regions.

Further information: History of the administrative divisions of China before 1912 § Provinces and Feudatory Regions under the Qing dynasty, and Qing dynasty in Inner Asia

By the latter half of the Qing Dynasty (1644–1912), there were 18 provinces, all of them in China proper (內地十八省). Jiangsu and Anhui were originally one province called Jiangnan, with its capital at Nanjing. There was no discrete time period when the two halves of Jiangnan were split, but rather, this was a gradual process.

Each province had a xunfu (巡撫; xúnfǔ; translated as "governor"), a political overseer on behalf of the emperor, and a tidu (提督; tídū; translated as "captain general"), a military governor. In addition, there was a zongdu (總督; zǒngdū), a general military inspector or governor general, for every two to three provinces.

In 1884 Xinjiang became a province; in 1907 Fengtian, Jilin, and Heilongjiang were made provinces as well. Taiwan became a province in 1885, but China ceded Taiwan to Japan in 1895. As a result, there were 22 provinces in China (Outer China and China proper) near the end of the Qing Dynasty.

The Republic of China, established in 1912, set up four more provinces in Inner Mongolia and two provinces in historic Tibet, bringing the total to 28. In 1931, Ma Zhongying established Hexi in the northern parts of Gansu but the ROC never acknowledged the province. However, China lost four provinces with the establishment of the Japanese puppet state of Manchukuo in Manchuria. After the defeat of Japan in World War II in 1945, China re-incorporated Manchuria as 10 provinces, and assumed control of Taiwan as a province. As a result, the Republic of China in 1946 had 35 provinces. Although the Republic of China now only controls one province (Taiwan), and some islands of a second province (Fujian), it continues to formally claim all 35 provinces (including those that no longer form part of the area of the People's Republic of China).

The People's Republic of China abolished many of the provinces in the 1950s and converted a number of them into autonomous regions. Hainan became a separate province in 1988, bringing the total number of provinces under PRC control to 22.

In contrast, the Republic of China also had a number of provinces under its control such as Taiwan and Fujian, which the ROC currently administers, though the ROC abolished the Xinjiang Provincial Office in 1992. In 1998, after streamlining of the two provinces, some of its powers from the Taiwan and Fujian Provincial Governments were gradually transferred to county governments. This fractured further between 2018 and 2019 when the ROC central government de facto abolished the provincial governments with most of the remaining powers given to the Executive Yuan.

During the 20th century, China claimed that numerous neighbouring countries and regions in Asia were "lost territories" of China.[12][13] Many of these "lost territories" were under the rule of Imperial Chinese dynasties or were tributary states.[12] Sun Yat-sen claimed that these territories were lost due to unequal treaties, forceful occupation and annexation, and foreign interference. Chiang Kai-shek and Mao Zedong, among others, were supportive of these claims.[14] China published a series of maps during this time known as a "Map of National Shame" (simplified Chinese: 国耻地图; traditional Chinese: 國恥地圖; pinyin: Guóchǐ dìtú) which showcased some of the "lost territories" that had links to various Imperial Chinese dynasties.

The provinces in southeast coastal area of China – such as Jiangsu, Zhejiang, Fujian and (mainly) Guangdong – tend to be more industrialized, with regions in the hinterland less developed.