The Province of Quebec was a colony in North America created by Great Britain in 1763 after the Seven Years' War. During the war, Great Britain's forces conquered French Canada. As part of terms of the Treaty of Paris peace settlement, France gave up its claim to Canada and negotiated to keep the small but rich sugar island of Guadeloupe instead.[1] By Britain's Royal Proclamation of 1763, Canada (part of New France) was renamed the Province of Quebec. The new British province extended from the coast of Labrador on the Atlantic Ocean, southwest through the Saint Lawrence River Valley to the Great Lakes and beyond to the confluence of the Ohio and Mississippi Rivers. Portions of its southwest (south of the Great Lakes) were later ceded to the United States in the Treaty of Paris (1783) at the conclusion of the American Revolution although the British maintained a military presence there until 1796. In 1791, the territory north of the Great Lakes was divided into Lower Canada and Upper Canada.

Under the Proclamation, Quebec included the cities of Quebec and Montreal, as well as a zone surrounding them, but did not extend as far west as the Great Lakes or as far north as Rupert's Land.[2]

In 1774, the British Parliament passed the Quebec Act that allowed Quebec to restore the use of French customary law (Coutume de Paris) in private matters alongside the English common law system, and allowing the Catholic Church to collect tithes. The act also enlarged the boundaries of Quebec to include the Ohio Country and part of the Illinois Country, from the Appalachian Mountains on the east, south to the Ohio River, west to the Mississippi River and north to the southern boundary of lands owned by the Hudson's Bay Company, or Rupert's Land.

Through Quebec, the British Crown retained access to the Ohio and Illinois Countries after the Treaty of Paris (1783) ceded control of this land to the United States. By well-established trade and military routes across the Great Lakes, the British continued to supply not only their own troops but a wide alliance of Native American nations through Detroit, Fort Niagara, Fort Michilimackinac, and so on, until these posts were turned over to the United States following the Jay Treaty (1794).

Quebec retained its seigneurial system after the conquest. Owing to an influx of Loyalist refugees from the American Revolutionary War, the demographics of Quebec came to shift and now included a substantial English-speaking Protestant element from the former Thirteen Colonies. These United Empire Loyalists settled mainly in the Eastern Townships, Montreal, and what was known then as the pays d'en haut west of the Ottawa River. The Constitutional Act of 1791 divided the colony in two at the Ottawa River, so that the western part (Upper Canada) could be under the English legal system, with English speakers in the majority. The eastern part was named Lower Canada. 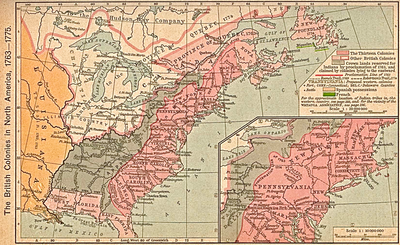 After the capitulation of Montreal in 1760, New France was placed under military government. Civil government was instituted in 1764. The following were the governors:

There were also "lieutenant governors", but these were merely the deputies of the governors, and should not be confused with the subsequent to 1791 Lieutenant-Governor of Quebec.

Counsellors to the governor

Further information: Council for the Affairs of the Province of Quebec

The individuals James Murray called into the council from 1764 to 1766:

Around 1763 to 1764 the province was divided into two judicial districts:

In 1790 the Trois-Rivières District was formed out of part of Quebec District.