A protectorate, in its inception adopted by modern international law, is a dependent territory that has been granted local autonomy and some independence while still recognizing the suzerainty of a greater sovereign state. In exchange for this, the protectorate usually accepts specified obligations, which may vary greatly, depending on the real nature of their relationship. Therefore, a protectorate is an autonomous area under a higher sovereignty. They are different from colonies as they have local rulers and rarely experience immigration of settlers from the suzerain state.

However, a state that remains under the protection of another state while retaining its independence is known as a protected state, different from a protectorate.

In amical protection, the terms are often very favorable for the protectorate. The political interest of the protector is frequently moral (a matter of accepted moral obligation, prestige, ideology, internal popularity, or dynastic, historical, or ethno-cultural ties). Or the protector's interest is in countering a rival or enemy power (e.g., preventing the rival from obtaining or maintaining control of areas of strategic importance). This may involve a very weak protectorate surrendering control of its external relations; this, however, may not constitute any real sacrifice, as the protectorate may not have been able to have similar use of them without the protector's strength.

Amical protection was frequently extended by the great powers to other Christian (generally European) states and to smaller states that had no significant importance.[ambiguous] In the post-1815 period, non-Christian states (such as China's Qing dynasty) also provided amical protection towards other much weaker states.

In modern times, a form of amical protection can be seen as an important or defining feature of microstates. According to the definition proposed by Dumienski (2014): "microstates are modern protected states, i.e. sovereign states that have been able to unilaterally depute certain attributes of sovereignty to larger powers in exchange for benign protection of their political and economic viability against their geographic or demographic constraints".[1]

Conditions regarding protection are generally much less generous for areas of colonial protection. The protectorate was often reduced to a de factocode: lat promoted to code: la condition similar to a colony, but the pre-existing native state continuing as the agent of indirect rule. Occasionally, a protectorate was established by another form of indirect rule: a chartered company, which becomes a de factocode: lat promoted to code: la state in its European home state (but geographically overseas), allowed to be an independent country with its own foreign policy and generally its own armed forces.

In fact, protectorates were declared despite not being duly entered into by the traditional states supposedly being protected, or only by a party of dubious authority in those states. Colonial protectors frequently decided to reshuffle several protectorates into a new, artificial unit without consulting the protectorates, a logic disrespectful of the theoretical duty of a protector to help maintain its protectorates' status and integrity. The Berlin agreement of February 26, 1885 allowed European colonial powers to establish protectorates in Black Africa (the last region to be divided among them) by diplomatic notification, even without actual possession on the ground. This aspect of history is referred to as the Scramble for Africa. A similar case is the formal use of such terms as colony and protectorate for an amalgamation, convenient only for the colonizer or protector, of adjacent territories over which it held (de factocode: lat promoted to code: la ) sway by protective or "raw" colonial logic.

Protectorates differ from League of Nations mandates and their successors, United Nations Trust Territories, whose administration is supervised, in varying degrees, by the international community. A protectorate formally enters into the protection through a bilateral agreement with the protector, while international mandates are stewarded by the world community-representing body, with or without a de factocode: lat promoted to code: la administering power.

*protectorates which existed alongside a colony of the same name 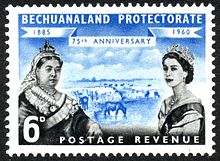 The legal regime of "protection" was the formal legal structure under which French colonial forces expanded in Africa between the 1830s and 1900. Almost every pre-existing state in the area later covered by French West Africa was placed under protectorate status at some point, although direct rule gradually replaced protectorate agreements. Formal ruling structures, or fictive recreations of them, were largely retained as the lowest level authority figure in the French Cercles, with leaders appointed and removed by French officials.[12]

The German Empire used the word Schutzgebiet, literally protectorate, for all of its colonial possessions until they were lost during World War I, regardless of the actual level of government control. Cases involving indirect rule included:

Before and during World War II, Nazi Germany designated the rump of occupied Czechoslovakia and Denmark as protectorates:

In the colonial empire:

Main article: Vassal and tributary states of the Ottoman Empire

Contemporary usage by the United States