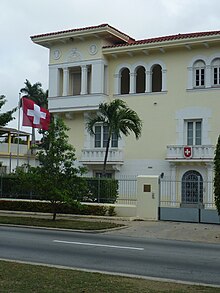 Between 1991 and 2015, the Swiss Embassy in Washington, D.C. also officially represented Cuba's interests in the United States.[1]

In a comprehensive mandate, the protecting power carries out most diplomatic functions on behalf of the protected state. This is necessary when relations are so hostile that the sparring nations have no diplomatic or consular staff posted on each other's territory. For example, Sweden carries out limited consular functions for the United States, Canada, and Australia in North Korea.[4]

The energetic efforts of Elihu B. Washburne, the United States Minister to France, set a precedent for the actions of protecting powers in war.[32] The American flag was raised over the North German Embassy, and the embassy archives were transferred to the U.S. legation for safekeeping. Washburne arranged for the evacuation of 30,000 North German subjects from France in the opening days of the war. As the only chief of mission from a major power to remain in the French capital during the Siege of Paris, he was also charged with the protection of seven Latin American consulates and was responsible for feeding 3,000 German civilians who were stuck in the city.[31][33]

The United States was initially a popular choice for protecting power, going back to its protection of the North German Confederation during the Franco-Prussian War. The pinnacle of American diplomatic protection came during World War I, when the United States accepted reciprocal mandates from five of the largest belligerents on both sides: Britain, France, Austria-Hungary, Germany, and the Ottoman Empire. Between 1914 and 1917, the United States accepted a total of 54 mandates as protecting power.[35] When the United States entered the war on the Allied side in 1917, the American mandates were transferred to smaller neutrals, with the Netherlands, Spain, and Switzerland being popular choices.

In the interwar period, the role of a protecting power was finally formalized in the Geneva Convention of 1929. Protecting powers were allowed to inspect prisoner of war camps, interview prisoners in private, communicate freely with prisoners, and supply books for the prison library. However, a suggestion by the International Committee of the Red Cross that it be made responsible for ensuring compliance with the treaty was rejected.[6]

The United States remained a popular choice at the start of World War II, accepting 75 mandates on behalf of Allied countries between 1939 and 1941. However, the United States was no longer seen as a disinterested neutral, and none of the Axis countries asked the United States to be its protecting power.[35] The greater scope of the war also disqualified two of the most popular protecting powers of the First World War: Francoist Spain remained neutral but was Axis-leaning, and the Netherlands were occupied by Germany. As a result, Switzerland and Sweden became the most popular choices for protecting power. Switzerland formally undertook 219 mandates for 35 states, and represented another eight states unofficially, while Sweden accepted 114 mandates for 28 states.[36]

The interests section was born in the aftermath of Rhodesia's Unilateral Declaration of Independence in 1965, when nine African countries broke off diplomatic relations with the United Kingdom. The protecting power for the United Kingdom notified the receiving governments that British diplomats were members of the protecting power's own embassy. As a result, the British diplomats retained their diplomatic immunity and could stay in the former British embassy, which had been placed into the charge of the protecting power.[39] The innovation was widely adopted after the Six-Day War of 1967. The Arab states allowed American diplomats to remain in their capitals as the U.S. Interests Section of the respective protecting power, while Israel allowed Soviet diplomats to remain in Tel Aviv as the Soviet Interests Section of the Finnish Embassy.[40]

The fiercest proxy wars of the Cold War were civil wars, including the Vietnam War. Because the principal belligerents each claimed to be the country's sole legitimate government, they did not recognize each other and refused to maintain diplomatic relations with any countries that recognized the other side. This difficulty was resolved by Protocol I (1977) to the Geneva Conventions, which stipulated that the belligerents should nominate protecting powers to the International Committee of the Red Cross. The Red Cross would then approach any countries that appeared on both lists, without the belligerents having to communicate with each other directly. If no arrangement could be made with a third country, then the belligerents had to accept the Red Cross or another international organization to act as the protecting power.[32]

Certain countries may have agreements to provide limited consular services to the citizens of other countries. This does not necessarily constitute a protecting power relationship, as the host country may not have formally agreed, and there may in fact be diplomatic relations between the host country and the third country, but no physical representation. Without the agreement of the host country, consular officials in this role may not be recognized as representing the interests of another, and be limited to a "good offices"[citation needed] role.