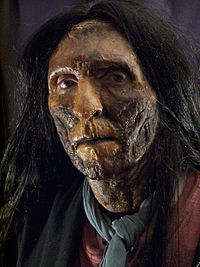 Example from work of a special make-up artist

Prosthetic makeup (also called Special make-up effects and FX prosthesis) is the process of using prosthetic sculpting, molding and casting techniques to create advanced cosmetic effects. In some ways, Prosthetic makeup goes back to the beginning of film making with A Trip to the Moon (French: Le Voyage dans la Lune) is a 1902 French adventure short film directed by Georges Méliès. Where the man on the moon was a combination of makeup and a prosthetic type mask with added pastes. Of course the great makeup artist Jack Pierce who was a Hollywood make-up artist best remembered for creating the iconic makeup worn by Boris Karloff in Frankenstein and his makeup for the Wolfman and more. Modern prosthetic makeup was revolutionized by John Chambers in such films as Planet of the Apes and Dick Smith in Little Big Man.These artists developed many techniques that we still use today. These artists taught and inspired the next generation of Special Effects makeup artists who in turn developed more advanced techniques for effects makeup including developing different materials, animatronics and added computer elements. These artist trained and inspired the next generation of artists to continue the line of special effects artistry.

The process of creating a makeup prosthetic appliance begins with a thought out design created by the artist or production. Once the actor has been chosen, the effects artist will prepare the actor for the process of taking a mold of the actor's face, head or body part called lifecasting. Lifecast molds are made from prosthetic alginate or more recently, from skin-safe platinum silicone rubber. This initial mold can be relatively weak but flexible. A hard mother mold, also known as a jacket or matrix, is typically made of plaster or fiberglass which is created over the outside of the initial flexible mold to provide support. This mold is used to cast a copy of that part of the actor, in a hard resin or plaster type material to eventually use as a base for sculpting the prosthetic.This is considered a "positive" or lifecast.

Before sculpting the clay prosthetic over the positive, The positive must be prepared by adding "keys" or mold points along the edges of it, which are often added using clay or more plaster or carved into the lifecast, to make sure that the two pieces of the mold will fit together correctly.often the lifecast will be given an additional border in clay or plaster to have an area free of detail and undercuts to add these keys. Then the entire lifecast / positive with the added border with keys is then molded. This insures a stable area with built in keys to sculpt the prosthetic over. It also ensures that the artist has a good usable copy of the actors parts that can be duplicated by casting additional copies if needed. Often multiple copies are used to make variations or stages of prosthetics or different prosthetics for the same actor.

Lifecasts of actors faces were often kept as decorations in many Hollywood special effects and makeup effects studios and often passed from one effects artist to another. Lifecasts of full bodies and body parts are also used and reused as the basis for making fake body parts, severed limbs, and various "gore" type effects used in horror films or films where body parts are required.

The prosthetic required is sculpted in clay on top of the positive. The prosthetic will be sculpted over the lifecast of that body part to become the design intended. For example, if the desired look is a pig nosed person then the artist would sculpt the pig nose over the actors real nose on the lifecast or positive copy. The edges of the clay should be made as thin as possible, for the clay is a stand-in for what will eventually be the prosthetic piece. Once sculpted the positive with the new addition of the clay sculpted prosthetic part must be molded. Since the positive has been prepared with the additional boarder and keys, it actually becomes one part of the prosthetic mold itself. Once molded, and clay removed, new mold cleaned out, the positive is one part of the mold and the new mold is the other side which has the negative of the newly sculpted prosthetic. This gives two or more pieces of a mold - a positive of the face or body part, and one (or more for complex molds) "negative" mold piece(s) with prosthetic sculpted in.

As the film/television industry continues to grow, so do the capabilities of the technologies behind it. Since the debut of newer technologies, many have feared that CGI (Computer Generated Imagery) will put practical SFX makeup out of business. More can be done with CGI than can be done with makeup as some things simply aren't possible when working in reality. Many views circulate on the subject.

Tom Woodruff Jr. and Alec Gillis, two experienced SFX artists from Amalgamated Dynamics near L.A., share what they see as the middle ground on the subject. In an interview, they explain that most movies use (out of necessity) a combination of practical effects and CGI. They see CGI as a tool that can be utilized in a good way or a bad way, just like practical effects.[1] Tom Savini (an SFX artist known for his work in Dawn of the Dead and Creepshow) states: "They still use the make-up guys to design the creatures and that’s what they work from. I don’t think you’ll see make-up effects guys hanging out on corners with signs that say: WILL DO EFFECTS FOR FOOD.”[2]

Moulage is a process in which makeup is used to simulate different wounds and trauma in order to prepare medical, emergency, and military personnel for what they could experience in the field and lessen psychological trauma.

Other real world uses are to create real disguises for Government agencies such as the F.B.I., C.I.A., Department of Justice to infiltrate possible terrorist groups. These skills are used to create and apply special effects makeup prosthetics to undercover agents to gather intelligence for combating international terrorism. Disguises let officers and agents move around as another person to complete undercover work without jeopardizing their actual identity.

Another real word use of prosthetics is the appearance of wounds to emulate death to be used by agencies such as the police departments to make someone appear as the victim of a murder during " hit or murder for hire " sting. Where a suspect hires a hit-man (killer) to murder someone and the police stage a set of pictures or video to make the suspect believe that the "hit" or murder has been carried out. These situations are made to gather evidence on the suspect before the actual crime of murder has been committed.