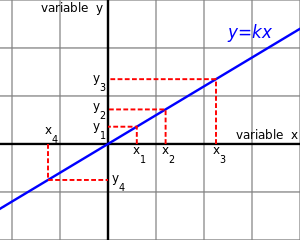 If several pairs of variables share the same direct proportionality constant, the equation expressing the equality of these ratios is called a proportion, e.g., a/b = x/y = ... = k (for details see Ratio).

Given two variables x and y, y is directly proportional to x[1] if there is a non-zero constant k such that

The relation is often denoted using the symbols "∝" (not to be confused with the Greek letter alpha) or "~":

the proportionality constant can be expressed as the ratio

A direct proportionality can also be viewed as a linear equation in two variables with a y-intercept of 0 and a slope of k. This corresponds to linear growth.

Inverse proportionality with a function of y = 1/x

Hence the constant "k" is the product of x and y.

The graph of two variables varying inversely on the Cartesian coordinate plane is a rectangular hyperbola. The product of the x and y values of each point on the curve equals the constant of proportionality (k). Since neither x nor y can equal zero (because k is non-zero), the graph never crosses either axis.