Progressive metal (sometimes known as prog metal) is a fusion genre melding heavy metal and progressive rock that combines the loud "aggression"[3] and amplified guitar-driven sound of the former with the more experimental, cerebral or "pseudo-classical" compositions of the latter. One of these experimental examples introduced to modern metal was djent.[3] The music typically showcases the extreme technical proficiency of the performers, and usually uses unorthodox harmonies as well as complex rhythms with frequent meter changes and intense syncopation.

Progressive metal, as a distinct musical style, was primarily advanced by members of the American heavy/power metal scene of the mid-1980s, particularly Queensrÿche, Fates Warning and, later, Dream Theater. It has since developed over time in a non-linear fashion, with countless groups demonstrating innovations in personal ways.[citation needed]

The origins of the genre date back to the very beginning of heavy metal/hard rock and progressive rock when some bands began to merge the two different approaches.[citation needed] 1960s pioneers King Crimson maintained their musical innovation while incorporating a harder approach, using dissonance and experimental tones, yet still maintaining a relationship to the power chords of hard rock. Canadian trio Rush are widely recognized as bridging the gap between hard rock, English prog, and pure heavy metal.[6] Initially influenced by Led Zeppelin, they evolved to combine established progressive rock technique with blues-based power chords. Records such as 2112 (1976) showcased technical expertise and complex compositional skill while still utilizing a more direct approach than the established English prog rockers.

1984 brought full length debut albums from American bands Queensrÿche,[7] from Washington, and Fates Warning,[8] from Connecticut. Both expanded their music to include more progressive elements (The Warning 1984, The Spectre Within 1985) – some through sound experimentation and compositional refinement, others through extremely complex structures and atypical riffs – up to the two seminal works in 1986: Rage for Order and Awaken the Guardian.[9][10] In the following years the two bands, while following different paths – more basic and simple the first, more articulate and complex the latter - explore and expand the technical refinement and sonic finesse of their music, continuing to lay the foundations of the genre with important works such as Operation: Mindcrime (1988) by Queensrÿche, No Exit (1988) and Perfect Symmetry (1989) by Fates Warning.

Progressive metal also found a home in the growing U.S. speed metal movement, influencing popular heavy metal bands Metallica - ...And Justice for All (1988).[11] "Math-metal" pioneers Watchtower, from Texas, took the concept of time-changes to a new level, combining thrash metal, syncopation and prog in their albums Energetic Disassembly (1985)[12] and Control and Resistance (1989), giving rise to an extremely technical approach based on the rhythmic deconstruction typical of jazz fusion.[13] This same type of prog metal will be later integrated into death metal by American bands such as Atheist (1991's Unquestionable Presence).[14] Among the other pioneering thrash metal bands, one of the most important is the Canadian Voivod, with their complex and experimental style, full of psychedelic dissonances (Dimension Hatröss 1988, Nothingface 1989).[15]

The major US bands that contribute to further delineating and developing the genre are Psychotic Waltz and Dream Theater. The former, with an approach halfway between Watchtower and Fates Warning, produced A Social Grace (1990), melding their signature sound with the psychedelic Into the Everflow (1992),[16] while the latter explored the legacy of the bands that preceded them while advancing their personal style with When Dream and Day Unite (1989). Both albums focused on keyboards and band members' instrumental skills, and their efforts resulted in two fundamental albums, that institutionalize classic progressive metal - Images and Words (1992) and Awake (1994).[17]

As for Europe, among the pioneers are the Germans Sieges Even, who, starting from the techno thrash of Watchtower, explore the more technical and angular side of progressive metal with The Art of Navigating by the Stars (2005).[18]

The following groups are some of the other notable progressive metal bands that formed in the US.

• Shadow Gallery - Carved in Stone (1995), with elements of melodic and power metal;

• The neoclassical groups Symphony X - The Divine Wings of Tragedy (1997), Redemption - The Fullness of Time (2005), and OSI - Office of Strategic Influence (2003), with Kevin Moore (ex-keyboardist of Dream Theater) and Jim Matheos (guitarist of Fates Warning);

The following groups are some of the other notable progressive metal bands that formed in Europe.

• The technical and experimental groups including the Norwegian Spiral Architect, with their innovative approach between Watchtower and Fates Warning in A Sceptic's Universe (1999), Leprous - Tall Poppy Syndrome 2009) and Frantic Bleep[citation needed]

Among the bands of the late 1990s who managed to bring innovation to the Dutch Ayreon (a project by Arjen Anthony Lucassen) and the Swedes Pain of Salvation. Ayreon focused on theatrical and melodramatic rock operas Into the Electric Castle (1998) and The Human Equation (2004), performed by many different members of prominent metal bands.[citation needed] Pain of Salvation was always working towards an unusual style, demonstrated by the eclecticism and anti-conformism of Faith No More, One Hour by the Concrete Lake (1998), BE (2004)[19] Forerunners of a more experimental and alternative approach include Thought Industry - Mods Carve the Pig: Assassins, Toads and God's Flesh (1993), Mind over Four, and Voivod. Another important and key figure for eclectic and unusual prog is the singer, guitarist and composer Devin Townsend, who brought a vanguard attitude to highest levels within this genre (Terria 2001).

As of 2019, the genre is still constantly evolving in multiple forms, and has reached a far broader variety of sounds and styles than it had at its origin, with many of the historical bands continuing to record new music and tour, while thousands of other new bands emerge in the underground scene every year, from all over the world. Recently, Mastodon - Crack the Skye (2009) and Gojira - Magma (2016) are two examples of progressive bands that have reached a greater mainstream popularity.

One of the hallmark musical qualities of progressive metal is the stylistic eclecticism that is pervasive across many groups. In between the riffs, choruses, solos, etc. typical of rock and metal songs, prog metal bands very often include sections inspired by jazz, classical, Middle Eastern music (especially often using the phrygian dominant scale), Dixieland, ragtime, and many others. This is usually achieved by the keyboard player of the band playing unique sounds, or by including instruments that are unorthodox for metal, such as the saxophone. The idea of incorporating these different kinds of music was primarily pioneered by Dream Theater and it is seen throughout most of their discography. Other groups that frequently use these eccentric sections include Haken, Between the Buried and Me, Thank You Scientist, Opeth, Liquid Tension Experiment, Circus Maximus, and many, many others.

A ragtime solo played by Jordan Rudess in the middle of "The Dance of Eternity", an otherwise heavy metal song by Dream Theater. This is a clear example of the mixing of styles that is very common in progressive metal.

Progressive metal can be broken down into many sub-genres corresponding to certain other styles of music that have influenced progressive metal groups.[20] For example, two bands that are commonly identified as progressive metal, King's X and Opeth, are at opposite ends of the sonic spectrum to one another King's X are greatly influenced by softer mainstream rock and, in fact, contributed to the growth of grunge, influencing bands like Pearl Jam." Opeth's growling vocals and heavy guitars (liberally intermixed with gothic metal-evocative acoustic passages and clean melodic vocals) often see them cited as progressive death metal, yet their vocalist Mikael Åkerfeldt refers to Yes and Camel as major influences in the style of their music.[21] 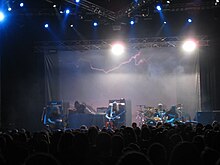 Similarly, bands such as Dream Theater, Planet X, Puya,[22] Liquid Tension Experiment, The Faceless, Between the Buried and Me and Animals as Leaders have a jazz influence, with extended solo sections that often feature "trading solos". Cynic, Atheist, Opeth, Pestilence, Between the Buried and Me and Meshuggah all blended jazz fusion with death metal, but in dramatically different ways. Devin Townsend draws on more ambient influences in the atmosphere of his music. Progressive metal is also often linked with power metal, hence the ProgPower music festivals, with bands such as Fates Warning and Conception originating as power metal bands that incorporated progressive elements which came to overshadow their power metal roots. Recently, with a popularity in shred guitar, the genre of "technical metal" has become increasingly prevalent and popular. This has led to a resurgence of popularity for more traditional progressive metal bands like Dream Theater and Symphony X, and also has led to the inclusion within the progressive niche of bands that do not necessarily play in its traditional style such as thrash/power Nevermore and technical death metal pioneers Necrophagist and Obscura. These bands are often labeled progressive being as they play complex and technical music which do not readily cleave to any other genre.

In the late 2000s, bands such as Born of Osiris, Periphery, Tesseract, Animals as Leaders and Vildhjarta popularized the "djent" style of progressive metal in a sound originally developed by Meshuggah. It is characterized by palm-muted, syncopated riffs (often incorporating polymeters), as well as use of extended range guitars.[23] Extended range guitars also feature in other forms of progressive metal; artists including Devin Townsend, Dir En Grey, and Ne Obliviscaris have used 7-string guitars without being part of the "djent" movement.

Proyecto Eskhata, a Spanish band, has received much press coverage in Spain for its fusion of progressive rock and rap metal, which journalists have described as "progressive rap metal".[24][25][26][27]

Progressive doom is a fusion genre that combines elements of progressive metal and doom metal.[1] Bands include King Goat,[1] Below the Sun,[28] Sierra,[29] and Oceans of Slumber.[30]

Although both favor experimentation and non-standard ideas, there are rather large differences between the two genres. The experimentation of progressive metal has a strong emphasis on technicality and theoretical complexity. This is done by playing complex rhythms and harmonies and implementing unusual time signatures and song structures - all with the use of traditional instruments.[31] In experimental metal, most of the experimentation is in the use of unusual sounds and instruments - being more unorthodox and questioning of musical conventions.[32]