Private member&#39;s bill Citizenship Law
bill which proposes a law affecting only limited individuals or entities
Not to be confused with Private law or Private member's bill.

Proposed bills are often categorized into public bills and private bills. A public bill is a proposed law which would apply to everyone within their jurisdiction. This is unlike a private bill which is a proposal for a law that would apply to a particular individual or group of individuals, or corporate entity. After a bill is enacted, these bills become public acts and private acts, respectively.

Private law can afford relief from another law, grant a unique benefit or powers not available under the general law, or relieve someone from legal responsibility for some allegedly wrongful act. There are many examples of such private law in democratic countries, although its use has changed over time. A private bill is not to be confused with a private member's bill, which is a bill introduced by a "private member" of the legislature rather than by the ministry.

The term "public bill" differentiates such a bill from a private bill, which is a legislative bill affecting only a single person, group, or area, such as a bill granting a named person citizenship or, previously, granting named persons a legislative divorce.

In practice, a (technically) public act can have the effect of a private act by the addition of restrictions such as limiting the act's effect to areas falling within a certain population bracket.

Public bills are the most common bills introduced in the Parliament of the United Kingdom. If they are enacted, they become Public General Acts (in contrast with Local and Personal Acts).

There are two types of private Act in the United Kingdom. The first are acts for the benefit of individuals (known as private or personal acts) which have historically often dealt with divorces or granting British nationality to foreigners, but in modern times are generally limited to authorising marriages which would otherwise not be legal.[1]

The second type are Acts for the benefit of organisations, or authorising major projects such as railways or canals, or granting extra powers to local authorities (known as local acts).[2]

In the United Kingdom, there is another classification known as a hybrid instruments which share characteristics of both public and private bills.

Public bills are the most common type of law in the United States. 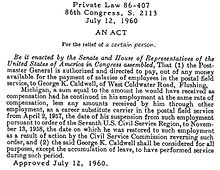 In the United States, private bills were previously common. Now federal agencies are able to deal with most of the issues that were previously dealt with under private bills as these agencies have been granted sufficient discretion by the United States Congress to deal with exceptions to the general legislative scheme of various laws. The kinds of private bills that are still introduced include grants of citizenship to individuals who are otherwise ineligible for normal visa processing; alleviation of tax liabilities; armed services decorations and veteran benefits.

In some cases, where the recipient of a benefit of a private bill did not want it identified as such (especially in the case of tax relief), a public law would be proposed, but restricted to a certain class of persons usually identified by being in a specific location, having a specific kind of tax event, and occurring during a narrow window of time. For example, if Acme Corporation were incorporated in the (fictional) State of Winnemac on January 14, 1967, and wanted relief from a tax on the sale of a subsidiary in the City of Zenith for $18 million in stock, that occurred on April 5, 2012, their Member of Congress might write a statute declaring "such tax of the type shall not be imposed on any corporation chartered in the State of Winnemac after January 12, 1967 and on or before January 14, 1967 for an intrastate transaction involving a stock transfer of not less than $12 million nor more than $20 million which occurred after April 2, 2001 and on or before April 5, 2012." By making the terms of the law apply to only one organization it has the effect of a private law without actually naming the party to be granted relief.

Private laws are published individually as slip laws and included chronologically in United States Statutes at Large.[3] Slip laws and U.S. Statutes at Large are available in most academic libraries and Federal Depository Library Program institutions, and at the U.S. Government Publishing Office.[4]