Princess Margriet of the Netherlands

Princess Margriet of the Netherlands (Margriet Francisca; born 19 January 1943) is the third daughter of Queen Juliana and Prince Bernhard. As an aunt of the reigning monarch, King Willem-Alexander, she is a member of the Dutch Royal House and currently eighth and last in the line of succession to the throne.[1]

Princess Margriet has often represented the monarch at official or semi-official events. Some of these functions have taken her back to Canada, the country where she was born de facto, and to events organised by the Dutch merchant navy of which she is a patron.

The Princess was born in Ottawa Civic Hospital, Ottawa[2] to Princess Juliana of the Netherlands and Prince Bernhard of Lippe-Biesterfeld. Her mother was heir presumptive to Queen Wilhelmina.

The Dutch family had been living in Canada since June 1940 after the occupation of the Netherlands by Nazi Germany. The maternity ward of Ottawa Civic Hospital in which Princess Margriet was born was temporarily declared to be extraterritorial by the Canadian government.[3][4] Making the maternity ward outside of the Canadian domain caused it to be unaffiliated with any jurisdiction and technically international territory. This was done to ensure that the newborn would derive her citizenship from her mother only, thus making her solely Dutch, which could have been very important if the child had been male, and as such, the heir of Princess Juliana. It is a common misconception that the Canadian government declared the maternity ward to be Dutch territory. Since Dutch nationality law is based primarily on the principle of jus sanguinis it was not necessary to make the ward Dutch territory for the Princess to become a Dutch citizen if the parent is Dutch. Since Canada followed the rule of jus soli, it was necessary for Canada to disclaim the territory temporarily so that the child would not become a Canadian citizen. This unusual episode inspired the story of Passport to Pimlico , the Ealing comedy

Princess Margriet was named after the marguerite, the flower worn during the war as a symbol of the resistance to Nazi Germany. She was christened at St. Andrew's Presbyterian Church, Ottawa, on 29 June 1943. Her godparents included Franklin D. Roosevelt (President of the United States), Queen Mary (Queen dowager of the United Kingdom), Märtha, Crown Princess of Norway, and Martine Roell (lady-in-waiting to Princess Juliana in Canada).[5]

It was not until August 1945, when the Netherlands had been liberated, that Princess Margriet first set foot on Dutch soil. Princess Juliana and Prince Bernhard returned to Soestdijk Palace in Baarn, where the family had lived before the war.

It was while she was studying at Leiden University that Princess Margriet met her future husband, Pieter van Vollenhoven. Their engagement was announced on 10 March 1965, and they were married on 10 January 1967 in The Hague, in the St. James Church.[6] It was decreed that any children from the marriage would be titled Prince/Princess of Orange-Nassau, van Vollenhoven, with the style of Highness, titles that would not be held by their descendants. Together, they had four children: Princes Maurits (born 17 April 1968), Bernhard (born 25 December 1969), Pieter-Christiaan (born 22 March 1972), and Floris (born 10 April 1975).

The Princess and her husband took up residence in the right wing of Het Loo Palace in Apeldoorn. In 1975 the family moved to their present home, Het Loo, which they had built on the Palace grounds. 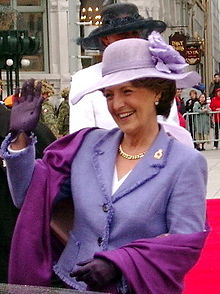 Princess Margriet arrives in Ottawa to attend the Canadian Tulip Festival in May 2002.

Princess Margriet is particularly interested in health care and cultural causes. From 1987 to 2011 she was vice-president of the Dutch Red Cross, who set up the Princess Margriet Fund in her honour. She is a member of the board of the International Federation of National Red Cross and Red Crescent Societies.

She is a member of the honorary board of the International Paralympic Committee.[7]

See also: List of honours of the Dutch Royal Family by country