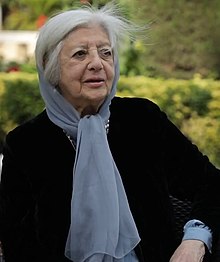 Princess India during an interview in 2019

Princess India of Afghanistan (Pashto/Dari: شاهدخت اندیا‎ Shahdukht Hindia, Italian: Principessa India d'Afghanistan; born 1929) is the youngest daughter of Amanullah Khan and Soraya Tarzi, who were respectively King and Queen consort of Afghanistan in the 1920s. She holds the title of princess of the royal house of Mohammadzai-Tarzi.

She was born in Bombay, British India, one month after her father's abdication in January 1929 and named in honor of the country they fled to exile. The family eventually settled in Rome, after an invitation by Queen Elena of Italy, where she grew up and continues to settle.[1] India visited Afghanistan for the first time in 1968, and started charity work for Afghan children seeking aid.[2]

In the 2000s, she formed the Mahmud Tarzi Cultural Foundation in Kabul, where she serves as vice chairman as of 2010.[3] In 2006, Princess India was appointed Cultural Ambassador to Europe by the Afghan President, Hamid Karzai. She spends her time between Rome and Kabul[4] and holds lectures at conferences throughout Europe.[5]

In August 2019, Princess India was invited by the Afghan government to take part in the state's celebrations for Afghanistan's 100th anniversary of independence.[1]

Princess India has been married twice and has two daughters and a son.[2]

Princess India thinks of her mother as a positive figure in contemporary Afghanistan, calling her achievements "highly regarded by Afghans", and adding her speeches of "how she encouraged Afghan women to become independent, to learn how to read and write."[6] Regarding women's rights in Afghanistan, India thinks that more education is needed for Afghan men to improve the situation.[7] She also said of the burqa that it is "not an Afghan garment and is not even an Islamic garment".[8]

In September 2011, Princess India of Afghanistan was honored by the Afghan-American Women Association for her work in women's rights.[9] In 2012, Radio Azadi named her "Person of the Year" for her humanitarian work.[10]