The prime minister of Jamaica (Jamaican Patois: Praim Minista a Jumieka) is Jamaica's head of government, currently Andrew Holness. Holness, as leader of the governing Jamaica Labour Party (JLP), was sworn in as Prime Minister on 7 September 2020, having been re-elected as a result of the JLP's landslide victory in the 2020 Jamaican general election.[2]

The prime minister is formally appointed into office by the governor general of Jamaica, who represents Queen Elizabeth II of Jamaica. 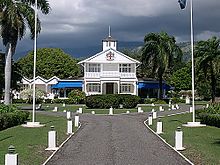