The prime minister of the French Republic (French: Premier ministre français), sometimes shortened to premier, is the head of the executive of the government of France. The prime minister is the holder of the second highest office of France. During the Third and Fourth Republics, the head of government was formally called president of the Council of Ministers (French: Président du Conseil des Ministres), generally shortened to president of the Council (French: Président du Conseil). However, the post was usually called "prime minister" or "premier" in non-French sources.

The prime minister proposes a list of ministers to the president of the Republic. Decrees and decisions of the prime minister, like almost all executive decisions, are subject to the oversight of the administrative court system. Few decrees are taken after advice from the Council of State (French: Conseil d'État). All prime ministers defend the programs of their ministry, and make budgetary choices. The extent to which those decisions lie with the prime minister or president depends upon whether they are of the same party.

The prime minister is appointed by the president of the Republic, who is theoretically free to pick whomever he pleases for the post. In practice, because the National Assembly does have the power to force the resignation of the cabinet by adopting a motion of censure, the choice of prime minister must reflect the will of the majority in the Assembly. For example, right after the legislative election of 1986, President François Mitterrand had to appoint Jacques Chirac prime minister although Chirac was a member of the RPR (Rally for the Republic) and therefore a political opponent of Mitterrand. Despite the fact that Mitterrand's own Socialist Party was the largest party in the Assembly, it did not have an absolute majority. The RPR had an alliance with the UDF, which gave them a majority. Such a situation, where the president is forced to work with a prime minister who is an opponent, is called a cohabitation.

While prime ministers are usually chosen from amongst the ranks of the National Assembly, on rare occasions the president has selected a non-officeholder because of their experience in bureaucracy or foreign service, or their success in business management—Dominique de Villepin, for example, served as prime minister from 2005 to 2007 without ever having held an elected office.

According to article 21 of the Constitution,[2] the prime minister "shall direct the actions of the Government". Additionally, Article 20[2] stipulates that the Government "shall determine and conduct the policy of the Nation", and it includes domestic issues, while the president concentrates on formulating directions on national defense and foreign policy while arbitrating the efficient service of all governmental authorities in France. Other members of Government are appointed by the president "on the recommendation of the prime minister". In practice the prime minister acts on the impulse of the president to whom he is a subordinate, except when there is a cohabitation in which case his responsibilities are akin to those of a prime minister in a parliamentary system.

The prime minister can "engage the responsibility" of his or her Government before the National Assembly. This process consists of placing a bill before the Assembly, and either the Assembly overthrows the Government, or the bill is passed automatically (article 49).[2] In addition to ensuring that the Government still has support in the House, some bills that might prove too controversial to pass through the normal Assembly rules are able to be passed this way.

The prime minister may also submit a bill that has not been yet signed into law to the Constitutional Council (article 61).[2]

Before he is allowed to dissolve the Assembly, the president has to consult the prime minister and the presidents of both Houses of Parliament (article 12).[2] 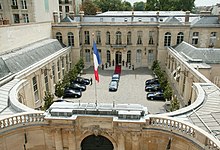 Under the Third Republic, the French Constitutional Laws of 1875 vested the president of the Council with similar formal powers to those which at that time the British prime minister possessed. In practice, however, this proved insufficient to command the confidence of France's multi-party parliament. Most notably, the legislature had the power to force the entire cabinet out of office by a vote of censure. As a result, cabinets were often toppled twice a year, and there were long stretches where France was left with only a caretaker government. Under the circumstances, the president of the Council was usually a fairly weak figure whose strength more dependent on charisma than formal powers. Often, he was little more than primus inter pares, and was more the cabinet's chairman than its leader.

After several unsuccessful attempts to strengthen the role in the first half of the twentieth century, a semi-presidential system was introduced under the Fifth Republic. It was at this point that the post was formally named "Prime Minister" and took its present form. The 1958 Constitution includes several provisions intended to strengthen the prime minister's position, for instance by restricting the legislature's power to censure the government. As a result, a prime minister has only been censured once during the existence of the Fifth Republic, in 1962 when Georges Pompidou was toppled over objections to President Charles de Gaulle's effort to have the president popularly elected. However, at the ensuing 1962 French legislative election, de Gaulle's coalition won an increased majority, and Pompidou was reappointed prime minister.

The current officeholder is Jean Castex, who was appointed on 3 July 2020. 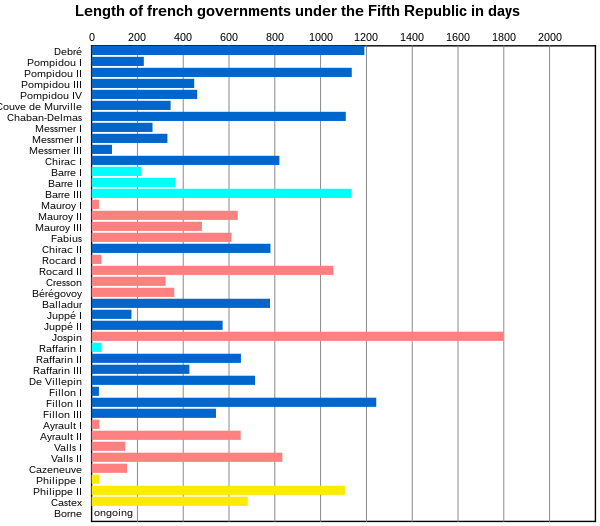 Length of the successive governments of the French Fifth Republic