Formally appointed by the governor-general, the office of the prime minister is governed by Westminster system convention as it is not described in the Australian constitution. To become prime minister, a politician of the House of Representatives must be able to command the confidence of the chamber. As such, the prime minister is typically the leader of the majority party or coalition. Prime ministers do not have a set duration or number of terms, but an individual's term generally ends when their political party loses a federal election, or they lose or relinquish the leadership of their party.

Thirty people have served as prime minister, the first of whom was Edmund Barton taking office on 1 January 1901 following federation. The longest-serving prime minister was Robert Menzies, who served over 18 years, and the short-serving was Frank Forde, who served one week. There is no legislative line of succession, however convention determines that the governor-general shall commission the deputy prime minister on a caretaker basis. 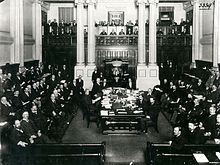 Australia's first prime minister, Edmund Barton at the central table in the House of Representatives in 1901.

The prime minister of Australia is appointed by the governor-general of Australia under Section 64 of the Australian Constitution, which empowers the governor-general, as the official representative of the Crown, to appoint government ministers of state on the advice of the Federal Executive Council, and requires them to be members of the House of Representatives or the Senate, or become members within three months of the appointment. The prime minister and treasurer are traditionally members of the House, but the Constitution does not have such a requirement.[6] Before being sworn in as a Minister of State, a person must first be sworn in as a member of the Federal Executive Council if they are not already a member. Membership of the Federal Executive Council entitles the member to the style of The Honourable (usually abbreviated to The Hon) for life, barring exceptional circumstances. The senior members of the Executive Council constitute the Cabinet of Australia.

According to convention, the prime minister is the leader of the majority party or largest party in a coalition of parties in the House of Representatives which holds the confidence of the House. Some commentators argue that the governor-general may also dismiss a prime minister who is unable to pass the government's supply bill through both houses of parliament, including the Australian Senate, where the government doesn't normally command the majority, as happened in the 1975 constitutional crisis.[7] Other commentators argue that the governor-general acted improperly in 1975 as Whitlam still retained the confidence of the House of Representatives, and there are no generally accepted conventions to guide the use of the governor-general's reserve powers in this circumstance.[8] However, there is no constitutional requirement that the prime minister sit in the House of Representatives, or even be a member of the federal parliament (subject to a constitutionally prescribed limit of three months), though by convention this is always the case. The only case where a member of the Senate was appointed Prime Minister was John Gorton, who subsequently resigned his Senate position and was elected as a member of the House of Representatives.

Despite the importance of the office of Prime Minister, the Constitution does not mention the office by name. The conventions of the Westminster system were thought to be sufficiently entrenched in Australia by the authors of the Constitution that it was deemed unnecessary to detail these.[citation needed] Indeed, prior to Federation in 1901 the terms "premier" and "prime minister" were used interchangeably for the head of government in a colony.[9]

Following a resignation in other circumstances or the death of a prime minister, the governor-general generally appoints the deputy prime minister as the new prime minister, until or if such time as the governing party or senior coalition party elects an alternative party leader. This has resulted in the party leaders from the Country Party (now named National Party) being appointed as Prime Minister, despite being the smaller party of their coalition. This occurred when Earle Page became caretaker prime minister following the death of Joseph Lyons in 1939, and when John McEwen became caretaker prime minister following the disappearance of Harold Holt in 1967. However, in 1941, Arthur Fadden became the leader of the Coalition and subsequently Prime Minister by the agreement of both coalition parties, despite being the leader of the smaller party in coalition, following the resignation of UAP leader Robert Menzies.

Excluding the brief transition periods during changes of government or leadership elections, there have only been a handful of cases where someone other than the leader of the majority party in the House of Representatives was Prime Minister: 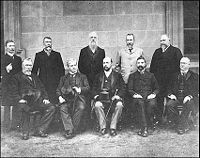 The first prime minister of Australia, Edmund Barton (sitting second from left), with his Cabinet, 1901.

The Constitution divides power between the federal government and the states, and the prime minister is constrained by this.[11]

The prime minister is also the responsible minister for the Department of the Prime Minister and Cabinet, which is tasked with supporting the policy agendas of the prime minister and Cabinet through policy advice and the coordination of the implementation of key government programs, to manage Aboriginal and Torres Strait Islander policy and programs and to promote reconciliation, to provide leadership for the Australian Public Service alongside the Australian Public Service Commission, to oversee the honours and symbols of the Commonwealth, to provide support to ceremonies and official visits, to set whole of government service delivery policy, and to coordinate national security, cyber, counterterrorism, regulatory reform, cities, population, data, and women's policy.[12] Since 1992, the prime minister also acts as the chair of the Council of Australian Governments (COAG), an intergovernmental forum between the federal government and the state governments in which the prime minister, the state premiers and chief ministers, and a representative of local governments meet annually.[13]

As of 1 July 2019, Australia's prime minister is paid a total salary of $549,250. This is made up of the 'base salary' received by all Members of Parliament ($211,250) plus a 160 percent 'additional salary' for the role of prime minister.[22] Increases in the base salary of MPs and senators are determined annually by the independent Remuneration Tribunal.[21]

Prime ministers Curtin, Fadden, Hughes, Menzies and Governor-General The Duke of Gloucester 2nd from left, in 1945.

While in office, the prime minister has two official residences. The primary official residence is The Lodge in Canberra. Most prime ministers have chosen The Lodge as their primary residence because of its security facilities and close proximity to Parliament House. There have been some exceptions, however. James Scullin preferred to live at the Hotel Canberra (now the Hyatt Hotel) and Ben Chifley lived in the Hotel Kurrajong. More recently, John Howard used the Sydney Prime Ministerial residence, Kirribilli House, as his primary accommodation. On her appointment on 24 June 2010, Julia Gillard said she would not be living in The Lodge until such time as she was returned to office by popular vote at the next general election, as she became Prime Minister by replacing an incumbent during a parliamentary term. Tony Abbott was never able to occupy The Lodge during his term (2013–15) as it was undergoing extensive renovations, which continued into the early part of his successor Malcolm Turnbull's term.[23] Instead, Abbott resided in dedicated rooms at the Australian Federal Police College when in Canberra.

During his first term, Rudd had a staff at The Lodge consisting of a senior chef and an assistant chef, a child carer, one senior house attendant, and two junior house attendants. At Kirribilli House in Sydney, there is one full-time chef and one full-time house attendant.[24] The official residences are fully staffed and catered for both the prime minister and their family. In addition, both have extensive security facilities. These residences are regularly used for official entertaining, such as receptions for Australian of the Year finalists.

The prime minister receives a number of transport amenities for official business. The Royal Australian Air Force's No. 34 Squadron transports the prime minister within Australia and overseas by specially converted Boeing Business Jets and smaller Challenger aircraft. The aircraft contain secure communications equipment as well as an office, conference room and sleeping compartments. The call-sign for the aircraft is "Envoy". For ground travel, the prime minister is transported in an armoured BMW 7 Series model. It is referred to as "C-1", or Commonwealth One, because of its number plate. It is escorted by police vehicles from state and federal authorities.[25]

Politicians, including prime ministers, are usually granted certain privileges after leaving office, such as office accommodation, staff assistance, and a Life Gold Pass, which entitles the holder to travel within Australia for "non-commercial" purposes at government expense. In 2017, Prime Minister Malcolm Turnbull said the pass should be available only to former prime ministers, though he would not use it when he was no longer PM.[26]

Only one prime minister who had left the Federal Parliament ever returned. Stanley Bruce was defeated in his own seat in 1929 while Prime Minister but was re-elected to parliament in 1931. Other prime ministers were elected to parliaments other than the Australian federal parliament: Sir George Reid was elected to the UK House of Commons (after his term as High Commissioner to the UK), and Frank Forde was re-elected to the Queensland Parliament (after his term as High Commissioner to Canada, and a failed attempt to re-enter the Federal Parliament).

The Acts Interpretation Act 1901 confers upon acting ministers "the same power and authority with respect to the absent Minister's statutory responsibilities".[29]

As of September 2020, there are six living former Australian prime ministers.[37]

The greatest number of living former prime ministers at any one time was eight. This has occurred twice:

Six Australian prime ministers – Forde, Curtin, Menzies, Hughes, Fadden and Holt – at a meeting of the Advisory War Council in 1940. Percy Spender (Minister for the Army) seated third from the right.

Prime Ministers have been granted numerous honours, typically after their period as Prime Minister has concluded, with a few exceptions. Prime Ministers were awarded honours within the British honours system before 1975, when appointment to the Order of Australia began. Only one former Prime Minister, John Howard, has been awarded a British Honour since 1975, being the Order of Merit (within the Queen's personal gift) in 2012.[44]

In almost all occasions these honours were only accepted by non-Labor/conservative Prime Ministers. However, appointment to the Privy Council of the United Kingdom was accepted by all Prime Ministers until 1983 (with the exception of Alfred Deakin, Chris Watson and Gough Whitlam), with Malcolm Fraser being the last Prime Ministerial appointee.

In addition to these honours, all deceased former Prime Ministers of Australia currently have federal electorates named after them, with the exceptions of Joseph Cook (a Division of Cook does exist, but it is only named after explorer James Cook) and the recently late Bob Hawke.

The longest-serving prime minister was Sir Robert Menzies, who served in office twice: from 26 April 1939 to 28 August 1941, and again from 19 December 1949 to 26 January 1966. In total Robert Menzies spent 18 years, 5 months and 12 days in office. He served under the United Australia Party and the Liberal Party respectively.

The shortest-serving prime minister was Frank Forde, who was appointed to the position on 6 July 1945 after the death of John Curtin, and served until 13 July 1945 when Ben Chifley was elected leader of the Australian Labor Party.